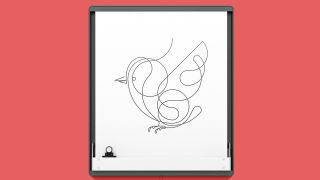 Looking to support a creative technology with a difference? Now's your chance, because creative robotics pioneer Joto has just launched a crowdfunding campaign on Crowdcube. It's looking to raise £250,000, with 12 per cent equity on offer.

Joto is building technology that "offers a new intersection between the worlds of design and technology." Or, to put it simply, it has created the awesome next stage of etch-a-sketch evolution.

Thanks to a clever combination of robotics and artificial intelligence with pen and ink, Joto has developed a connected whiteboard that draws live on request. Capable of sketching everything from works of art to messages at the press of a button, Joto can turn pixels on a screen into pen and ink drawings. Watch it in action in the video below.

Keen-eyed Kickstarter campaign followers might recognise Joto from a fundraiser on that site earlier in the year. Back then it sold over 1,800 units in just four weeks and raised an impressive £362,307.

On top of this, Joto was named the public's favourite design at 2017's Beazley Designs of the Year exhibition at London's Design Museum, and will be made available to shoppers via an exclusive partnership with Selfridges later in 2017.

“Most of the content we love is stuck on our screens, and as a result so are we," says Jim Rhodes, founder of Joto. "We are reimagining a world where people can feel connected beyond the screen. This is an exciting first step in the exploration of creative robotics for the home. Not the type to be scared of, but the sort you’d love to put on your wall.”

By supporting Joto on Crowdcube, you'll be helping it to launch its hardware across even more channels and regions, as well as accelerating the development of the software platform where users will be able to view and exchange content with peers and other content providers.

If you want to support Joto and help it to reach its goal of £250,000, you've got until 30 September to send some money its way.