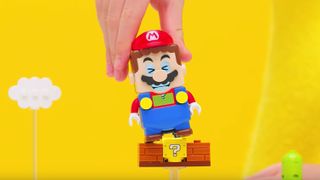 It's the collaboration we didn't know we needed. Lego and Nintendo have joined forces to create a brand new product called Super Lego Mario, and it isn't a Lego-themed Mario video game. In fact, it's the reverse: a Mario-themed Lego set.

The set combines traditional Lego building blocks with digital technology. A Lego Mario figure contains screens on his face and chest, and can interact with bricks to collect coins and progress through levels. Lego Mario's facial expression changes when, for example, he is placed on a flame tile (ours would too). Even in square-jawed lego form, Mario looks great (check out our guide for more character design inspiration). The whole thing basically looks like a real world Super Mario Maker. Check out Nintendo's official video (below) to see it in action.

“We are very excited to bring Mario into the physical world," says Julia Goldin, chief marketing officer at Lego. “By seamlessly incorporating the latest digital technology, Lego Super Mario is a highly social, interactive and collaborative experience for kids." We hope this includes big kids too (check out our list of the best Lego sets for adults), but Super Lego Mario is certainly being marketed at children – the video shows two kids using the set in a rather dystopian–looking playroom:

Full details have yet to be announced. We don't know the price or release date, or whether there will be multiple sets involved. All we know is that as big Lego fans and big Mario fans, we're probably going to be huge Super Lego Mario fans.