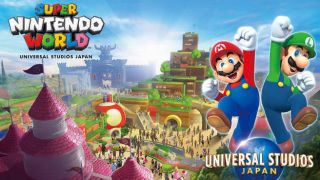 We'll admit it. We haven't spent the last decade of our lives dreaming about how much better our lives would be if we were able to go to a live-action Nintendo utopia theme park where giant Marios appeared from nowhere and led us down big green pipes, and we were able to collect coins with our watches.

But now that Super Nintendo World is soon to be part of Universal Studios Japan, and all of the above will soon become a reality (if the promo video is to believed), frankly, we're beside ourselves. Even if we never get to go to the new theme park that's set to open just ahead of the Tokyo Olympics this summer, we still love that it will exist.

What's so special about this new park? Apart from being based on one of our favourite character designs of all time, Super Mario, Super Nintendo World also represents a big shift in theme park design, and interactive experiences in general.

Don't believe us? Here are three reasons we're super-excited for Super Mario's theme park, including why we love the promo we've seen so far.

So walking around a theme park is usually pretty fun. There are rides. There might be characters. There is overpriced junk food. But Super Nintendo World takes all this a step further. Visitors will be given a Power Up Band, which tracks their experience, and allows them to interact with the park, collect gold coins and compete against each other.

It's not clear what you'll actually win with said coins. Perhaps they'll give you money off the junk food? Or, more likely, reward you with a little Mario memento. We also expect that they'll get people coming back to the park more than once, in a bid to beat their friends. Good thinking, Universal.

Universal says these bands will bring the world of Nintendo to life "in a whole new way", and we're inclined to agree. Instead of just observing the game, visitors will actually be part of it. This sounds super-cool, and also a great use of all sorts of tech. We only hope it works. No one wants to collect a bunch of gold coins only for their Power Up Band to lose its erm, power, and its coins.

If Super Nintendo World is anything like the promo video (above), then we are truly in for a treat. This is the gaming utopia Mario fans have been dreaming of. It manages to look both fun and utterly ridiculous at the same time, with the music providing the perfect soundtrack for all the joyful running around.

This promo video makes it look like it would be impossible to be sad while at Super Nintendo World. Feeling a bit tired? Go jump on a mushroom! Standing a queue for too long? Touch a pole and it'll make a fun noise! Not winning any gold coins? Go ride on a Mario Kart, or jump on your opponent's head! (We really don't know how this one will work).

While we hope that the park will indeed feature groups of dancing people throwing Super Stars at each other, with any luck the music on this particular video won't be accompanying you around the whole place. That might get a little tiresome after a while (anyone who's been on the It's a Small World ride at Disney will understand).

We can't quite figure out the website for Super Nintendo World. Did its owners get so excited by all the gold coins and watches that they forgot to design it properly? Or does it deliberately look like it's been sent from the yesteryear of web design?

There are some parts that plain don't work, rather than having been deliberately styled this way (try clicking through to do, well, anything). If you can't read Japanese, the dodgy translations are also particularly enjoyable: "Furthermore, "power-up band" in hand, a vast area that consists of a number of layers , and challenge to a number of challenges with adventure, the world's first activity is born!" is probably our favourite.

Anyway, all of this crude design doesn't seem to bother us somehow. It just makes us feel like the real theme park is going to be extra charming, although hopefully more technically adept, and more accessible for the linguistically challenged. The website also includes the presentation video, see below.

If all of this has got you desperate to visit, then you may not have to travel all the way to Japan. Future parks are also planned for the US and Singapore. And in the meantime, you could always get your hands on a retro gaming console to get your Mario fix.