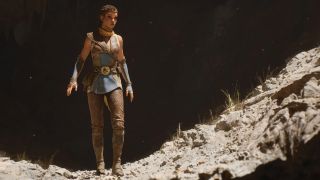 With every new generation of gaming, we find ourselves thinking, "Nope, this is it, graphics can't possibly get any better than this." And then, a few years later, along come new consoles with new graphics that somehow look even more real than before. Which, if the new demo of Epic Games' Unreal 5 Engine is anything to go by, is exactly what's about to happen. Again.

The demo (below), running on as-yet un-announced Playstation 5 hardware, dropped yesterday, and offers our first glimpse of what the machine will be capable of. Spoiler alert: it looks pretty incredible. From the photo-realistic cliffs to the sweeping, cinematic lighting, it makes the PS4's graphics look positively prehistoric. If you're inspired to create your own 3D worlds, check out our best 3D modelling software.

Like us, most YouTubers have been blown away by the visuals. "I‘m literally speechless," one user comments, "This looks so real it could be a movie". We couldn't agree more.

Rather than an upcoming game, the demo (catchily titled Lumen in the Land of Nanite) was created specifically to show off Epic's new engine, which will eventually become publicly available for developers to use to create incredible 3D worlds. But if there's one takeaway word from the demo, rather than 'incredible', it appears to be 'triangles'.

According to Epic, the new engine allows developers to render 3D objects with literally billions of said triangles, and create "as much geometric detail as the eye can see". Epic calls these triangles Nanites, while its new, reactive lighting system is called Lumen. (So that's why the demo is called Lumen in the Land of Nanite).

Unreal Engine 5 gonna have so many triangles we can finally render the perfect Toblerone.May 13, 2020

Nanites will mean that 3D artists can import "film-quality source art" directly into the engine, without worrying about restrictions such as polygon count budgets. And Lumen technology means lighting inside the Unreal Editor looks the same as it will on the console, "erasing the need to wait for lightmap bakes to finish and to author light map UVs", offering a massive time saving. All in all, the new engine represents a quantum leap for 3D artists and game developers as well as gamers.

And the good news doesn't end there – not only is Epic working on forward compatibility (so work created on UE4 can jump to UE5 when it's available), but it's also waiving royalties on the first $1 million of in game revenue for developers.

The only bad news is that the Unreal 5 engine won't be with developers until late 2021. Until then, we'll be watching Lumen in the Land of Nanite on repeat – because as far as we're concerned, this is it, graphics can't possibly get any better than this.