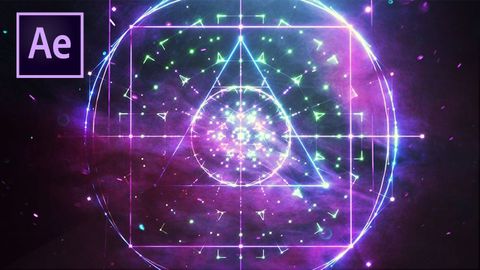 The ultimate tool for creating incredible animations and slick motion graphics – and a superb compositing tool, to boot. Just don’t expect to learn it in a weekend.

For motion graphics, animation and video professionals, After Effects is as important as Photoshop CC is to designers and photographers – if not more so. It’s an all-encompassing application with a professional toolset designed for anything from titling to character animation, compositing and more.

Its timeline and node-based approach makes it very easy to quickly animate anything. And as you delve deeper into the feature set, you can soon see why animators and artists on major motion pictures make it their tool of choice. It isn't a tool you can learn quickly, though, although a good place to start is with our list of After Effects tutorials.

As motion design and animation continue to creep to the forefront of ‘must have’ skills in a designer’s creative arsenal, we’re likely to see increasing efforts from Adobe to maintain this standard. Let’s take a look at what’s new.

The new data-driven animation tools let you animate charts, graphs and infographics using imported data. You can import JSON files as assets and reference their values in expressions – and the graphics update automatically when the data is edited.

Although the data can drive all kinds of animations – visual effects, movie titles, weather reports and so on – the area in which we’ve found the tools most useful is infographic design and integration, which is an area most motion designers will have worked in at some point.

These tools aren’t just incredibly powerful: when mastered, they should also save you an enormous amount of time. However, if you’re unfamiliar with data-led design work, or the necessary format types, I would urge you to seek out an online tutorial because it isn’t for the faint hearted.

Importing the JSON data isn’t the easiest of tasks. If you have an alternate data file format, such as MySQL or Excel of CSV, you can convert it into JSON or MGJSON (motion graphics JSON) file format and import it into After Effects, ready to be used within any animation.

You may need to use some data conversion software for this, which will usually give you the raw JSON data. After Effects can't import this raw data, only a .JSON file, so once you have your JSON data you'll need to input it into an application like Adobe Dreamweaver and save it out as a .JSON file, ready to be imported like any other file and experimented with.

The benefit of working with individual .JSON files is that you can swap them around and the layers will automatically update. So if you assign parts of the data in your layers to different JSON files, then replace the one currently being utilised, the data (place name and data points) will automatically update, reposition and change, while keeping all the animation you had previously added. This means you no longer have to suffer hours of tedium by having to individually adjust text and object layers.

Another interesting new feature to emerge in After Effects CC 2018 is the Create Nulls From Paths panel. This lets you build expression-driven animations, without the need to write said expressions yourself. The panel creates nulls from each path and shape point, giving you far more dynamic control over the way you animate.

To open the panel, go to the Window drop-down menu, and select Create Nulls From Path. The Nulls From Paths panel contains a variety of options. Select the path points on your object, and click Points Follow Nulls in the panel. You can also do this with vector shapes using the same process, but selecting Create Vector Shapes first.

The main benefit of this is it gives you more control over your shape and vector layers within After Effects. You’re now able to individually animate each path null that you create. You can also add expressions to each null, giving you further freedom to explore different creative pathways and animatic styles.

It’s worth pointing out, too, that you can use this feature with the new data-driven settings by assigning different parts of the JSON code to different nulls. This means that if you were to make a line graph of weather statistics, you’d be able to assign the key parts of different data to different nulls, and they would automatically change position when replaced with a new JSON file.

Adobe has also made further developments to its 3D and VR working space, enabling creatives to work faster in a new, meaningful way, while adding graphics into 360-degree spaces.

There’s a new integrated toolset for editing 360-degree VR footage, which includes a VR Comp Editor – which lets you undistort and edit stitched 360-degree videos – and a VR Extract Cubemap option. This converts 360 footage into a 3D cube formation to simplify motion tracking, object removal, and the addition of motion graphics, visual effects and more.

A small but important update sees new performance enhancements for layer transformations and motion blur. This makes After Effects much faster, without needing hardware updates.

As someone who regularly becomes tired of having to wait for layer previews containing fast blur, this feels like a positive move for Adobe. It also appears to recognise the financial issues some people may face, as optimising the capabilities of the GPU means you get a faster and better experience, without having to purchase additional hardware such as more RAM or an SSD.

The fact that Adobe is constantly trying to improve the performance on its software should create better customer satisfaction and further brand loyalty.

After Effects is a complex application. Its toolset is undoubtedly brilliant and ultra-deep, offering motion professionals the tools they need to create striking broadcast and film-ready animations and titles.

While less numerous than earlier versions, the new features brought to After Effects CC 2018 are amazing. They might seem niche at first glance – and largely not created with a beginner in mind – but additions like data-driven updates will save hours of time while opening up new creative pathways. The Create Nulls from Paths feature will also dramatically streamline your workflow.

Of course, there’s a huge learning curve. This is an application that requires extensive training – and the new start screen helps beginners embark on their adventure into motion design with less stress.

But once you do get to grips with it, it’s blazingly fast (with the right computer and hardware configuration, like in any video work) and has an intuitive timeline from which you can control pretty much every aspect of your project. It’s capable of almost anything you can imagine.

The ultimate tool for creating incredible animations and slick motion graphics – and a superb compositing tool, to boot. Just don’t expect to learn it in a weekend.