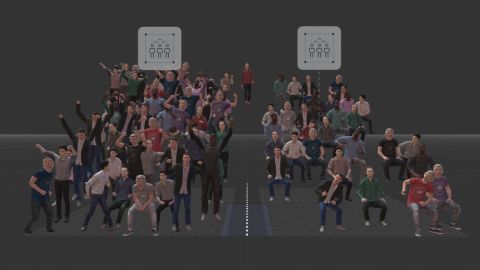 Anima 3 continues to be one of the best and most cost-effective options for any artists looking to populate their scene with people. Unreal Engine integration is the icing on the cake of this great release.

Adding in some convincing characters has always been the best way to make any 3D art scene come to life. Architectural visualisation especially can really benefit from adding crowds of people to a walkthrough or still in order to help sell a design.

Unfortunately, up until recently, the disciplines for creating a convincing 3D scene and rigging human characters have been quite difficult, especially when crowds or a street scene are involved. Then when it comes to animating, making sure the characters do not bump into each other can be yet another chore, especially when the 3D software does not have any bespoke crowd or character tools.

Luckily, the crowd animation software Anima from AXYZ Design has been through a rapid upgrade path over the past couple of years. And with Anima 3, the team have added more refinements and improvements rather than simply reinventing the wheel.

Anima removes most of the headache of adding people to existing 3D scenes. The main workflow of Anima is unchanged: load in a model of a scene into Anima 3, and then draw paths of where the people (or actors) are to go. The parameters of the path, such as width and directions, are easily adjusted. Anima can then populate them with a user-defined number of actors, which can be adjusted as and when required. Anima has great granular control with direction, with speed and type of walk cycle all adjusted on each individual actor by selecting them in the viewport.

It is really satisfying to create a populated scene in a couple of clicks, using traffic lights to manage road crossings alongside seating animations to create a sophisticated population – for anything from a street scene to the crowd in a sports stadium. Things get even better when Anima 3’s sophisticated AI converts an actor’s walk cycle to make sure no characters walk into each other on the fly.

Each actor can also be posed and duplicated to make new actors in the editing mode window, and turned from a standing to a running or sitting actor using the Motion Clips Library or from a predefined list in the main scene view.

The primary change in version 3 is Anima stepping out from a perceived focus on architectural visualisation, allowing the software to become the basis of many character requirements across a range of disciplines. The big clue to this addition is Unreal Engine 4 support, which allows Anima 3 to integrate with the game engine and add actors to Unreal levels without having to animate them in Unreal itself.

This is great news for archviz specialists who are looking to make the move to real-time visualisation and potentially VR, as one Anima project can now work with 3ds Max, Cinema 4D and now Unreal Engine, creating efficiencies for visualisations across a range of different formats.

While Anima does export its characters in a wide range of formats, the plugin integration is still the best way to go in terms of raw performance and ease of use.

Anima does a good job of suiting every artist, from those who need to populate either a still or animation with people quickly, to those who really want to dive deep into the animations and character modifications. To integrate Anima into studio pipelines and other applications, an API toolset is available as well.

Anima 3 feels a lot more refined than the previous version, although the UI still takes a bit of getting used to. All of the major controls are intuitive, with responsiveness and viewport speed much improved. Adding paths and tools such as escalators is much easier than before, and snapping elements to one another to create complex systems of integration is much more logical and intuitive.

All the actor models when exported use PBR shading, making it easier than ever before to work with a variety of render engines and maintain the same look. The character models do look excellent and the motion cycles have also been refined. And if the models that come with Anima are not enough, there is a large online library that can be accessed and purchased directly from within Anima 3. AXYZ Design’s Metropoly characters can also be purchased and imported into Anima 3.

For new users, Anima 3 is still a bargain for anyone wanting sophisticated characters within their scene, and there's a free upgrade for any user whose licence-free update period is still active.

Anima 3 continues to be one of the best and most cost-effective options for any artists looking to populate their scene with people. Unreal Engine integration is the icing on the cake of this great release.