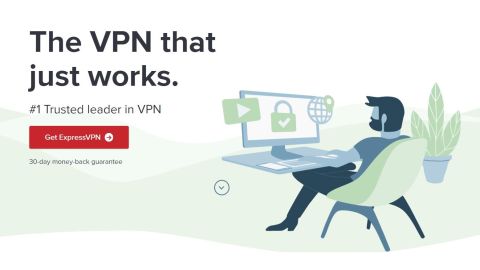 Despite its slightly higher price point, ExpressVPN offers the most complete VPN service on the market right now.

ExpressVPN is based in the British Virgin Islands and is one of the most well-rounded VPN service providers in the market today, which is why it's currently ranked top in Creative Bloq's guide to the best VPN services. It has one of the highest server counts, with more than 3,000 servers spread across 160 locations in 94 countries.

For our money, ExpressVPN is an ideal VPN service for even the choosiest of users. Not only does it provide top-notch security and privacy protection, but it also does without negatively affecting the overall performance of its clients. It does have a slightly higher price tag, but all things considered, this is certainly justified.

In this ExpressVNP review, we'll take an in-depth look at what the service has to offer.

ExpressVPN is packed with features to suit just about everyone’s VPN needs. For example, Smart Location automatically connects your device to the nearest server, to providing the best performance.

Another standard feature is the Network Lock, ExpressVPN’s version of a kill switch, which blocks all internet traffic and contains all your data in case of an unexpected VPN connection interruption.

Furthermore, ExpressVPN offers a split-tunneling feature that lets you select which apps you want to go through the VPN tunnel, and which you will allow to use the regular internet connection.

There's also DNS leak protection and the service runs a zero-knowledge 256-bit encrypted DNS on each of its servers, instead of redirecting your DNS traffic to OpenDNS or another third-party service. The Windows client comes with a built-in Speed Test that provides information on latencies and estimated download speeds.

Express used to offer only three simultaneous connections per user, but we're pleased to see it has upped that number to five, putting it more in line with competitor offerings, and making this service even stronger.

There are three pricing plans to choose from, with the 1-month option costing $12.95. The second-best is the 6-month subscription, which comes with a price tag of $9.99 per month. For the lowest cost-per-month you'll need to commit for a full year, at $6.67 per month. At time of writing, the annual subscription also came with a perk – three additional months for free.

ExpressVPN accepts multiple payment options, including all major credit cards, PayPal, Bitcoin, and more. The service comes with a no-questions-asked 30-day money-back guarantee and a 7-day free trial is available for iOS. ExpressVPN also has a referral program in which you can earn 30 days of free VPN service for each referral you bring in.

ExpressVPN offers bulletproof privacy protection. It combines the AES-256-CBC protocol with a 4096-bit SHA-512 RSA certificate to encrypt its control channel, as well as using a Hash Message Authentication Code to protect your regular data from being altered by hackers during transfer.

There are four protocol variations to choose from in the Windows client: OpenVPN/UDP, OpenVPN/TCP, L2TP/IPSec, and PPTP. The Android app, though, only has the OpenVPN TCP vs UDP L2TP, choice. In addition to UDP, TCP, and IPsec protocols, the iOS app includes the IKEv2 protocol. If you want to leave the choice of protocols to your ExpressVPN app, there is a default Automatic setting, which allows it to automatically pick the most appropriate protocol for your network.

ExpressVPN also supports Perfect Forward Secrecy, which automatically assigns you a new secret key each time you connect, and replaces it every 60 minutes of the open session. Therefore, even if a hacker manages to compromise your system, they will get only 60 minutes of data, tops.

In addition to providing leak protection of your DNS data, ExpressVPN also manages its own zero-knowledge 256-bit encrypted DNS on every server, adding a layer of protection from attackers trying to intercept your traffic.

ExpressVPN sticks to its no-logs policy to the T, openly describing it in detail on its website. So we learn that the company would never log any traffic information, DNS queries, IP addresses, or anything else that might lead back to the specific user. We are also told by the company that it does store very minimal information, such as which apps were successfully activated, dates of VPN connections (but not times), the total amount of data transferred per day, as well as which VPN servers were used.

Additionally, ExpressVPN’s country of registration is the British Virgin Islands, which has no data retention laws so your sensitive data is safe from snooping governments and other curious subjects.

ExpressVPN performs superbly, both in terms of connection times and download speeds. Our tests recorded no issues with either, with expectedly lower latencies for servers closer to our own location and locations with better infrastructure.

ExpressVPN is one of the top choices for accessing regionally blocked services including Netflix, BBC iPlayer, Amazon Prime, Hulu, Spotify and more. Its superior capabilities enable you to stream live sport and other events with minimal issues. Although Netflix is constantly working on its VPN detection and blocking mechanisms, ExpressVPN has proved a worthy adversary in fighting to keep the service unblocked for its customers.

ExpressVPN is also a great choice for P2P traffic/torrenting, providing a limitless service with no known issues. The provider supports the utilization of uTorrent for sharing files of any size, without any throttling or inferior speeds.

ExpressVPN also has two browser extensions: for Chrome and Firefox, and it is working on introducing one for Safari. Besides securing and anonymizing your internet traffic, these browser extensions can also spoof your HTML5 geolocation.

Setting up the apps is very user-friendly, but if you get stuck you can consult the website’s support section, which contains walkthroughs for setting up ExpressVPN as well as troubleshooting guides for any issues.

In addition to being available at any moment, day or night, ExpressVPN’s customer support is very approachable and knowledgeable. If the troubleshooting section or manual guides fail to address your questions, you can contact human support via live chat or email, or file a support ticket.

Despite its slightly higher price point, ExpressVPN offers the most complete VPN service on the market right now.