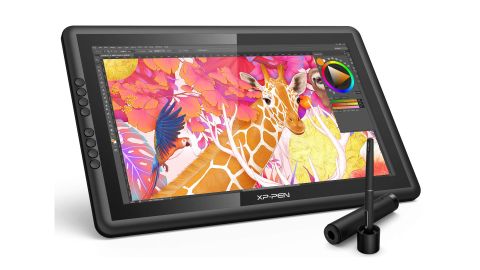 The XP Pen Artist Pro15.6 is a great budget screen-tablet, and is a great choice for hobbyists or beginners who can live with its flaws. But if you're a serious or pro artist, you'll probably find it makes too many quality concessions to hit that lower price point.

The big question with any new graphics tablet is 'how does it compare to the current market?'. Every new contender can boast improved features and specs, but ultimately what we want to know is if it's one of the best drawing tablets and how it stands up against the competiton (Wacom and Apple in this instance).

With its lightweight screen, pressure and tilt sensitive, battery-free pen, the XP-Pen Artist 15.6 Pro is arguably the best non-Wacom/Apple competitor so far. But it does have certain issues that hold it back from dethroning its larger competitors. However, the price point/product quality level trade-off will be good enough to sway some, depending on their needs.

The display has an impressive gamut of 84 per cent of Adobe RGB, which is actually higher than the Cintiq 16, which has a gamut of around 75 per cent RGB. However, the colour accuracy is good, but not perfect, so you'll need to use a colour calibrator to fix it to avoid your artwork's colours being inaccurate when printed.

The screen is capable of being extremely bright, and brightness can be conveniently adjusted by buttons on the side of the tablet.

The 15.6 Pro's screen is laminated and bonded, which improves parallax reduction. The low levels of parallax are very similar to the Cintiq. It's noticeable, but minor, and you'll get accustomed to it quickly. The pre-applied, and replaceable film cover's anti-glare properties reduce reflections considerably. Because the 15.6 doesn't have etched glass, the tablet surface is slippery, feeling more like a phone screen than paper. The 15.6 comes with a free, anti-fowling glove, in case you're not a fan of the screen's texture.

The stylus is battery-free and boasts 8192 levels of pressure sensitivity, as well as 60 degrees of tilt functionality. There are some caveats here; the tilt function doesn't feel as sensitive as the Cintiq's Pro Pen 2, and when being tilted, the alignment of the cursor goes askew, frustratingly offsetting the cursor from the nib of the stylus.

The pressure sensitivity feels a little unresponsive too, with more initial activation force required than you'd expect to get fainter brushstrokes to appear. Even if you experiment with the Pressure Curve in the settings, it doesn't feel as natural and fluid as the Cintiq 16. This may not be a deal-breaker to all creatives, it depends on your drawing and painting techniques and style. But if you're after consistent line width, or smooth transitions between low and high opacity, it can be grating.

Similarly, there is a noticeable amount of line jitter present, as well as line lag, which makes drawing smooth lines trickier. Again, these aren't enormous drawbacks for some people, but busy creatives and/or perfectionists will be frustrated having to correct brushstrokes repeatedly.

The stylus comes with a hefty plastic pen holder that houses eight replacement nibs and will definitely keep your stylus safe while travelling, and the holder opens to become a pen stand. There is no way of attaching the stand to your tablet though.

Considering that the XP-Pen Artist 15.6 Pro comes with a built-in stand, replaceable screen covers, a glove and a considerable number of spare nibs – all of which would cost extra with a Cintiq – the price is an attractive selling point.

The 15.6 Pro's USB connection cable allows you to both connect the display and draw power with the same cable, you don't need to attach it to an AC adapter. It can even be run from an external power bank, which adds to its portability. Durability-wise the 15.6 feels lighter than the Cintiq 16, which is a plus, but it also feels slightly less durable than the Cintiq 16. Heavy-handed artists may find that the screen distorts both when pressing down onto the screen, and on the edges if you're near them, but the majority of people will be fine. The tablet runs silently.

The 15.6 has eight built-in shortcut keys positioned down the side of the tablet, alongside the new red dial, which can be programmed to zoom in and out, alter brush sizes, and so on. It also comes with a stand that provides a similar angle to the Cintiq 16's foldout legs. The stand works, but the plastic feels slightly flimsy, and doesn't attach to the tablet, it simply rests on it. We leant down too heavily on the screen once, and it did tip sideways, but that was a one-off. There are no mounting holes for mounting to a stand or a VESA mount.

Even taking the criticisms mentioned into account, the XP-Pen Artist 15.6 Pro is a great bit of kit. It's conveniently sized, and so lightweight that it's very portable and easy to set up, even on a narrow desk.

The price/quality ratio is brilliant too. Long gone are the days where only professionals could justify paying for a decent quality screen tablet. This will keep plenty of creatives happy, and productive. It's superb value for money, and we can foresee this being a great introductory drawing tablet for many.

But while the 15.6 Pro has a lot of strengths, it's just hard not notice the lack of sensitivity with the stylus. And drawing and painting with it will feel slightly off to artists who work spend a lot of time working with finer details.

The XP Pen Artist 15.6 Pro is currently the best screen tablet alternative to Wacom Cintiq 16, if your budget is tight. It offers a good-quality screen, with low parallax, useful shortcut keys and a limited tilt functionality. It's nice to see a company seriously competing with Wacom. However, the 15.6 Pro isn't as good as the Cintiq when comparing its colour accuracy, overall build quality, feel of the surface, and line drawing quality. If you don't want to make these sacrifices, you're better off spending a bit extra and going for a Wacom. The price difference between the 15.6 and the iPad Pro is enormous, if all you need is a display tablet, this is a sensible way to save money; plus we expect the iPad to be rendered technologically obsolete years before a tablet will.

If the XP-Pen Artist Pro doesn't quite have all the necessary attributes you look for in a drawing tablet, here are some great alternatives:

Huion Kamvas Pro 13: $359/£302
A surprisingly good quality, low budget display tablet, that is let down by an unreliable pen when it comes to line jitter, and has a bizarrely placed power button that sits next to the shortcut keys, so you'll have to be careful that you don't accidentally turn it off while painting!
View Deal

Apple iPad Pro 11-inch: From $699.99/$719
If you're not just after something to hook up to a computer to draw on, but a whole system, the iPad Pro is a lovely, albeit expensive, all-in-one solution to taking your design studio with you. You'll need to fork out extra for an Apple Pencil to make the most of its digital painting capabilities.
View Deal

Wacom Cintiq 16: $649/£531
The current gold standard for what you're looking for from a 'budget' display tablet. It's on the pricier end of the scale, but not without good cause. The quality and performance of the Cintiq is superb, plus it supports every art-based app on desktop, and comes colour-calibrated out of the box.
View Deal

The XP Pen Artist Pro15.6 is a great budget screen-tablet, and is a great choice for hobbyists or beginners who can live with its flaws. But if you're a serious or pro artist, you'll probably find it makes too many quality concessions to hit that lower price point.