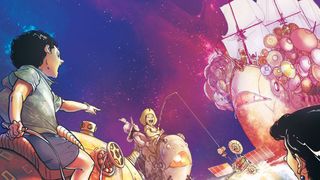 Five years ago, I was a brat who was overconfident about my art skills. I drew the same four poses over and over again, but since I drew them well, it just fed my ego!

Then I met one of my heroes, who was kind enough not to throw my sketchbook away, but harsh enough to let me know that I didn't know how to draw. "Your drawings have no life. You need to feel what you are drawing. Your back needs to ache if you're drawing someone bending over," he said.

Honestly, I didn't understand a thing. But it did set me off on a hunt to understand what he meant. Three years later, after having regularly sketched every day and having followed many sketching tips, I got the first glimpse of what he was getting at. While sketching a girl sinking into her sofa, I realised I was sinking myself, to feel the pose.

This wasn't my only experience, though: there were numerous more that shaped my observation. Each of them opened me up to a world of possibilities. Through this workshop, I would like to share my ideas that could give you that little push to explore the world for yourself. My aim is to help you personalise the worlds that you create through your art and truly learn how to draw.

Crooked noses, hair styles, moustaches, tattoos, fashion accessories… there's so much to observe and recreate on the canvas when painting human characters. And don't forget the patterns on various surfaces. They just add so much to an illustration.

Observe how subtle changes in body language can change the attitude of a person. A raised eyebrow can add volumes, although there's little physical change. Nuances could be atmospheric, too. Imagine a young boy reading a book. On the wall is a poster of Lionel Messi. Switch the poster to one of Albert Einstein and there's a complete change in context.

Here's an early observation and important lesson that I learned: our actions are rarely symmetrical in nature. Even the simplest of gestures like sitting or standing aren't evenly balanced.

You'll often hear artists say that symmetry is boring, and this is simply because it makes things feel too organised and forced. Generally, if a moment is something that calls for attention – say, an action that's grand or epic – is resorting to symmetry the best way forward?

04. Understand the nature of light

To understand light, ask yourself the following. Is the light warm, cool or neutral? Is it direct or is there ambient light? How intense is the ambient light compared to the main light source? Is there a secondary light source? What's the nature of these sources: direct, rim or diffused? And note how intense the light from one source is with respect to the other.

05. Capture the balance of tension and relaxation

Any form will generally have a combination of tension and relaxation. It's one of the things that brings life into the form. Keep observing the switch between the two states.

Student artists often ask me why their drawings look stiff. One of the most glaring issues I see is that people overlook which areas of their character's body are tense and which ones are relaxed. They draw hands, legs, the torso and so on well, but everything is almost rigid. If the entire body is tensed then the artwork will look stiff, too.

Acting isn't just about the face. It's also body language. At any given point, the human form is involved in 'acting out', or communicating emotion.

If you think it's enough to observe just the facial expressions, try acting in front of a mirror. Let's try anger. Do you feel your neck edging forward, or some neck muscles stretching? Some tension in your flexor group of muscles in the lower arm? Is your whole body moving forward? Now you see it, don't you? This is gesture drawing.

Is there something you observe that seems like a misfit? Okay, to tease your grey cells, imagine a pistol in the bedroom of a 15 year old. Now, that's wrong and highly unlikely, but maybe you'll come across something less dramatic, such as someone using a first-generation Nokia phone, or a Rubik's Cube in the hands of a four-year-old.

While you can cook these up from memory for your next project, you'll still need a rich visual library to trigger ideas at the right time! So, be on the lookout for the stranger things in life.

08. Include a secondary story

Can you see a story evolve in front of you? Perhaps it's something as mundane as the struggle of someone holding a mug of hot coffee (conflict), then using a tissue to blanket the mug, and holding it more comfortably (resolution). Even if it's not the intended story, these little beats can help add a secondary level of narration to your artwork.

If it's a split-second emotion, you might not have the time to draw it, so just capture the essence in your memory and then make gestures to document it. You can also present it as the mood that you want to document.

I had trouble doing value studies. Somehow I couldn't put similar values together. So I reinvented the wheel for myself. I started with pure blacks documenting only in black and white. A nearby coffee shop was an excellent place for my studies because it had strong overhead spotlights on the seats. These created crisp shadows and were easy to document. Slowly, I started introducing greys. I still have to think about values though – they don't come naturally.

Have you ever observed a person positioning themselves in a way that they almost fit into a particular space? Or a person's arm going around the edge of the sofa while they lean on it? While a bowling ball wouldn't make adjustments to fit in, we often do.

It's enlightening to observe how we knowingly – or unknowingly – make adjustments to interact with our environment. You can also observe the tension and relaxation at such times.

12. Look at the nature of materials

While I was working on the sets of a film, I noticed the nature of walls: how they reflected light, the way they age, their weight distribution, and so on. The nature of different materials means that they offer the artist a range of exciting possibilities.

Only when you know how a material behaves under different conditions will you be able to portray it realistically. Observe the folds on a leather jacket and those on a cotton shirt, or the sharp highlights on a metal ball, versus those on a rubber ball.

Culture is an all-encompassing term here. It includes regional, political, racial or even scientific culture. If you observe certain cultural underpinnings of a group or an individual and document them, then it'll help you define the personality of that group or individual a little more.

14. Use form, weight, proportion and perspective

The only way I can deal with these four heavyweights in one paragraph is with this exercise. Make someone lie on the ground with their knees bent at right angles, similar to the posture they achieve when they're sat on a chair. Stand closer to the legs so you can see the figure receding in perspective. Compare this to someone sitting on a chair. In the two figures, you'll be able to compare parts of the body, in terms of form, proportion, perspective and the body's response to gravity.

One of the exercises that I often do during my observational drawing sessions is stir things up for myself, just to turn the excitement dial a notch or two higher. I experiment with my drawings and go beyond the reality of the moment.

Sometimes I exaggerate the tension in the figure to levels that are not achievable by the human body, or push the existing scenario into a different world of physical laws. Purists might contest that this isn't observational drawing – and perhaps they're right – but I'm certainly having fun!