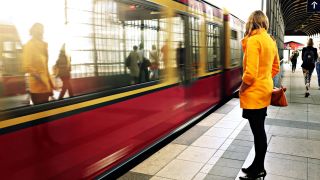 Trying to work on public transport can be taxing, particularly when signal is bad, you feel like a sardine crammed into a small space, or are surrounded by loud or obnoxious people. But it is possible, and not every way of working involves being tethered to your laptop or an internet connection.

We asked designers and developers how they manage to avoid spending their entire journey staring at 404 pages in frustration, and are able to make the most of their commute or travel time.

"I always feel great when I get work done on the train or at the airport because it’s like my time wasn’t wasted," says Michael Vestergaard, a freelance creative developer and interaction designer. "But it can be a challenge.

"I normally plan ahead specific animations, prototypes or code snippets I need for new or ongoing projects. These might be micro interactions, text and image transitions or even drone formations, such as our most recent launch for Verity Studios. This kind of work is easier to pick up after a distraction or a longer break and distractions such as noise, slow Wi-Fi, small screen and so on aren’t such a big deal."

"It’s about tailoring your work to your situation," agrees digital transformation consultant Sally Lait. "If I know I’m going have a patchy connection, I’ll save up writing tasks, use it as distraction-free time to read or learn something new. It’s important to set yourself up right and download what you need in advance."

02. Make sure you have the right equipment

"I sometimes work during my commute," says web developer Ben Read. "I’m currently working on a project that ties in many different services to one single static site using Gatsby.js. I carry a backup battery pack and typically use data tethering from my phone but it’s tricky when you’re pulling data from an API and suddenly the train goes into a tunnel.

As well as having the right equipment, you may also need to make sure it's set up properly for your needs. "I’ve run out of data twice this month because I forgot to disconnect the tether, then later ran ‘npm install’," says Read. "When you’ve got over 300 dependencies to download that can hurt your allowance. I should probably invest in an unlimited data plan."

03. Use the time for something else

"Because of that, I use the time I spend travelling listening to podcasts and articles. I follow lots of both work and non-work-related podcasts and I tend to listen to the former while commuting and on work trips. I also use Instapaper’s text-to-speech iPhone app so I don’t hurt my neck reading on my phone. It’s made me appreciate how important it is to have well-written semantic markup when creating content online!"

Freelance digital designer John Taylor says, "I often work in Manchester and it’s impossible to work on public transport whilst travelling to and from the city centre during rush hour, although it can lend itself to doing research like reading, listening to podcasts and watching videos.

"On quieter journeys, I sometimes do admin work like correspondence, bookkeeping and invoicing but this is rare. I can’t imagine trying to do any serious design or dev work whilst travelling, unless it was something simple like an amendment or minor update. There are too many distractions and the problems caused by overcrowding are not conducive to an effective working environment."

This article was originally published in net, the magazine for web designers and developers. Buy issue 312 or subscribe here.