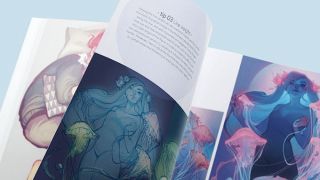 In September 2017, Dutch illustrator and animator Lois van Baarle launched her second crowdfunded project The Sketchbook of Loish. She smashed her £20,000 target almost instantly, eventually closing the campaign with some 10,000 backers pledging £383,404 to bring the project to life.

Van Baarle is by no means unique. Back in June, illustrator Iris Compiet saw her Faeries of the Faultlines artbook funded within 50 minutes. It raised 111,019 EUR before the campaign closed.

According to Kickstarter, 36 per cent of all campaigns are successful. But that means 64 per cent fail. So what’s the secret to running a successful Kickstarter? And are there any pitfalls artists should avoid? Read on to find out...

Check it’s the right platform for you

First, check that crowdfunding is the right way to raise capital for your project. Before throwing yourself into a campaign, ask yourself: do you have a clear goal? And do you have a compelling story to tell that will convince people to stump up the cash?

Compiet did, on both counts. She’d been working as a graphic designer for over 16 years before she crowdfunded her first sketchbook. “I knew all about designing books,” she says. “I wanted something luxurious – a book that would be amazing not only because of the art, but also how it looked. I wanted it to be a treasure in a bookcase. Only the best paper would do. I didn’t want to settle for less.”

Before launching both of her Kickstarter projects, Van Baarle spent time researching other campaigns in the same field – both those that had been successful and those that hadn’t.

“I read a lot of blogs on running a Kickstarter, and talked to people who knew more about the process than I did,” Van Baarle says. “I also started promotion ahead of time. It’s advised to start at least three months before launch, but I started a year in advance. I worked on it almost every day for 12 months.”

“If your project doesn’t have a bumper first day or two, then you’re fighting an uphill battle,” says Frisby. “We spent a good six months showing iterations of our new products on social media and blog posts, gathering feedback from the art community and building our mailing list,” he recalls. “We even spent time making memes and doing other unconventional things to offer value beyond saying ‘Hey, buy our bag!’, which can be kind of annoying.”

Yeow and Frisby also sent prototypes to leading artists and YouTubers, asking them to review the products and provide feedback. “This pre-launch buzz-building is crucial because if you have a good first few days then that momentum can really erupt as ‘social proof’, and you can quickly push past your funding goal as people see your campaign as a winner. I believe we funded our $30k goal in about four minutes,” he says.

“If we did it all again,” he adds, “we would have more early bird specials to avoid disappointment – we just didn’t expect them to go so quickly. We’d also engage with more artists and YouTubers from non-English speaking countries to broaden our exposure.”

Illustrator Emily Hare recommends taking time off work during your campaign – something she wasn’t able to do. She launched her artbook, Strangehollow, in April 2017 after shouting about it on social media for three months. To her surprise, she hit her £2,500 funding target in just two hours, with the project receiving more than £30,000 over the next month.

“I was overwhelmed on the first day of the project as I didn’t expect it to fund so soon, let alone finish the way it did,” says Hare. “Be prepared to be working non-stop, answering emails, posting about your project daily – and that’s only the start of it. It’s a full-time job.”

Also, consider the time needed for your rewards. One mistake Compiet made was to promise people who pledged within the first 48 hours an original sketch in their book. “I limited the time, but not the amount of sketches,” she admits. “I now have over 600 books to sign and sketch in!”

Things like packaging postcards, prints and other pledges also take time. And don’t forget storage. “I never thought I’d have more than 500 books sold,” says Compiet. “I’m looking at over 2,000 now. There’s no way I can store that many books in my home, so I need to rent a secure storage space and get insurance on the books while they’re in storage.”

One option is to collaborate with a publisher. Van Baarle teamed up with 3D Total for her Kickstarter campaigns. This meant she could focus on the art, while 3D Total took on the technical aspects. “My publisher set up the Kickstarter page, answered questions and did all the work that I didn’t have time for,” she recalls. “I was able to focus on the content of the book and engaging with my online audience, which is my area of expertise.”

Don’t underestimate costs when you’re budgeting a Kickstarter project: ask for full quotes from printers or other partners, keep an eye on taxes and always account for postage when setting your funding goal. “People often get caught out,” says Hare. “Make sure all your potential costs are covered in the funding goal.”

“I’ve learned to avoid over-promising and over-complicating a campaign,” says illustrator Sean Murray, who recently raised $25,593 for his second Sketchbook collection. “Too many reward levels and too many stretch goals without proper budgeting can get you in trouble. Make something awesome, show people how they can get the awesome thing, and then send them the awesome thing.”

Murray attributes his Kickstarter success to his increased Instagram audience. And Frisby agrees that developing a strong social following before launch day is key. He also advises building a mailing list. “For creatives in particular, the Kickstarter platform is useful for turning existing support into raised pledges, but not so effective at driving the new traffic necessary to have a very strong launch,” he says.

Ultimately, he says, it’s all about knowing your audience, and engaging with them before and during launch. “Speak their language,” he advises. “Don’t just ‘market’ to them. Make sure you offer something valuable.”

This article was originally published in ImagineFX, the world's best-selling magazine for digital artists. Subscribe now.