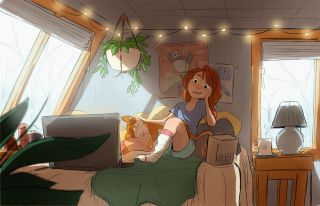 Should I go to art school? It's a question you'll be asking yourself if you want to join a big-name studio, work on AAA video games, blockbuster films or a groundbreaking TV series. Is a degree the best option, or would it be better to teach yourself through online tutorials and courses?

We've spoken to artists who have lived through that decision, and come out the other side with great advice on which choice might be the best one for you. Whatever choice you make, though, you'll need a killer design portfolio, and you might even find a dream job or internship over on our design jobs board.

So how do you decide?

Usefully, Lauren Panepinto, creative director and VP of Orbit Books, has created a tongue-in-cheek flowchart that can help guide you towards an informed choice.

But if that hasn't quite helped you make up your mind for you, here are some more words of wisdom from successful artists.

In 2016, Daniel Tal graduated with a BA in applied arts animation from Sheridan College in Oakville, Canada. He’s since been employed as a story artist with Pipeline Studios in Hamilton, so the formal path clearly worked for him. Yet he has a startling admission. “I realised about a year or two into college that the entire curriculum, more or less, “was doable on my own,” he recalls. “Almost everything school teaches you, you can learn yourself through books and the internet.”

That said, Tal doesn’t regret his BA. “I’m not the type of person who can self-regulate well,” he says, “and going through a formal programme forces you to avoid procrastination.” It also exposes you to things you might not have considered. “I only found interest in storyboarding in my second year of college,” says Tal. “Had I not gone, I don’t think I would have ever tried it.”

School doesn't have it all

Not all courses are perfect, of course. Mélanie Bourgeois, now a concept artist for Volta, had a less-than satisfactory experience studying 2D and 3D animation at a university in Quebec. “I was part of the first cohort, so a lot of things moved around when I attended,” she says. “None of the teachers were 2D animators, and while they were very nice, none of them had the skills to mentor a student hands-on when it came to 2D.” Consequently, Bourgeois had to fill in the gaps herself, using online learning resources. Yet she’s unsure how well she’d have coped if she’d self-taught entirely. “School helped me focus; I might have found it overwhelming all on my own,” she says.

“Online learning also doesn’t provide the same level of contacts and networks, or force you to consume culture outside your personal tastes.” The choice largely depends, Bourgeois feels, on the individual. “I know many successful artists who are self-taught,” she says. “And no one is going to turn down a good artist because they don’t have a piece of paper.”

But if both paths are valid, which is right for you? “It’s a very tough decision, with many factors to consider,” says Nick Fredin of online course provider CG Spectrum. A major one is cost: “In the US, degrees can cost over $100,000, with no guarantee of a job at the end of it.” Going it alone, though, can be daunting. “Without structured pathways guiding you towards your goals, self-teaching can be overwhelming and frustrating,” he cautions. “Opening a tool like Maya for the first time can be pretty scary.”

Student debt can be a factor

So what's Panepinto's personal take? “I’m glad I went to art school,” she says. “But if  I had to do it again, and go into deep debt as a result, I probably wouldn’t. I’d go to a community college, get a cheaper, well rounded degree, and study art on the side. I’d use the money I’d saved to travel to seminars and conventions, and take online mentorships.”

You’d might expect Sean Andrew Murray – a concept artist for the entertainment industry who also teaches Illustration at Ringling College of Art and Design in Florida – to disapprove of self teaching. But he, too, can see the benefits. “It enables you to craft exactly the kind of education you want, without all of the stuff you don’t,” he says.

“You can learn at your own pace, whether that’s slow and steady – perhaps while working another job – or rapidly, to get into the field quicker than the standard four year higher education program.”

One big disadvantage, though, is that it’ll probably be harder to build your network.

“The best schools connect students with a network of professors – many of whom may be industry pros themselves – as well as advisers, visiting artists, networking and recruiting events, and also other students, who act as your support system for years to come,” Murray says.

In truth, though, for most students it’s not a case of choosing between two directions, but a mixture of both. Those in academia will supplement their courses with online learning, while going the self-teaching route doesn’t necessarily mean taking a scattergun, isolated approach. Some online courses are pretty close to those offered by traditional universities. Take CG Spectrum, which offers courses in animation, VFX and game design.

“We offer specialised online education taught by award-winning mentors who are working in the industry, so you’re being taught by the very best.” says Fredin. “Our courses are built with input from major studios, so you graduate with the skills that employers are hiring for. We cut out all the noise and only teach what’s industry-relevant, so students aren’t wasting their hard-earned money.”

The Oatley Academy of Visual Storytelling, which helps artists further their careers in animation, illustration, games and comics, takes a similar line. As its founder, Disney artist Chris Oatley, says: “Although we’re an online school, we offer real-time mentorships, where you work with the instructor and your fellow classmates in a virtual classroom setting, just like you would in a physical school. To me, ‘Physical or online?’ is not the question. The question is: ‘How effective is the education?’”

In general, Oatley recommends what he calls a “Frankenstein approach” to art education. “Seek out the best teachers – whether online or offline – and learn from them,” he advises. “It really can be that simple… and far more affordable.”

This article was originally published in ImagineFX, the world's best-selling magazine for digital artists. Subscribe to ImagineFX.