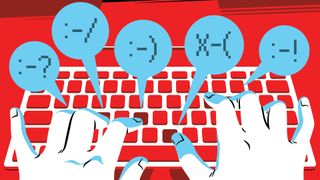 Good etiquette might not be your number one priority at work. It won't necessarily help you with master responsive web design or nail the perfect user experience. However, in the close-knit web design community, you'll find that being a thoughtful and considerate designer can get you a long way.

And so we asked seven top web pros: if you were writing a book on web designer etiquette, what dos and don'ts would you include? Here are their suggestions.

"Stop being shitty to women," says Mule Design co-founder, Mike Monteiro. "Stop being shitty to minorities. We keep talking about 'building things for us' and 'building the tools you need' as if they're some brilliant idea, instead of the selfish mantras of entitled baby men that they are. I look around at our industry and I see an ocean of white men 'building things for us' and it's led to a toxic web. It's time to grow up."

Communication is key for web standards advocate Bruce Lawson. "If you ask a question on a forum, and find out the answer elsewhere, post it so the next person with that question can find it," he suggests. "If you have an idea for a new web feature or API, tell the Web Platform Incubator Community Group – but share the problem you want to solve (not your preferred syntax or names). If you read a great blog post, or hear a great conference talk, take a moment to tell the author. It'll make their day."

If your project involves selling a product, don't forget to focusing on business goals alongside UX goals – making your client's business more profitable is your real aim here. "Make sure you immerse yourself in and understand the brand, the product and its users thoroughly before any 'design' begins," says Elena McGarry from Fingo.

"Build trust with users by adding value to the site by showing clear product placement with visible, legible calls to action. Don't underestimate requirements for accessibility, compatibility and responsiveness. Exercise simplicity and brevity in content but take care not to be too simplistic. Users need smooth, uncomplicated experiences, not dumbed-down boring interfaces. Striking the balance while keeping the user engaged is crucial."

Creative director Shane Mielke has no time for messy or disorganised source files. "Always organise your assets and descriptively name folders and layers," he insists. "It doesn't matter if you're on a huge team or the only person on a project. The more organised your files are, the easier it is for you or others to work with if you have to revisit projects months later. It's a matter of respect and personal pride, and it takes seconds. Imagine if a developer had a function called 'Copy of Layer 368' in their code. Would you employ a housekeeper that cleaned by hiding trash in drawers?"

"Make your own set of rules and stick with them," says digital designer Adelle Charles. "Set clear goals for what you want to accomplish. Follow a healthy process. For example, define, explore, refine, build and learn. Most importantly, communicate. Share and share often. It sounds simple, but communication with teammates while designing and iterating on work is most often overlooked. Don't gloss over the details. Grammar and content hierarchy are very important. Focus on users' interactions within the experience you're designing, and ensure you are telling the right story."

Web designer Inayaili de Léon hates it when people lazily assume, and say, that someone else's work is easy. "One personal rule I try to stick to is to never tell someone that 'this will only take you five minutes' – and this applies not only to other web designers but to anyone. Hands up, I am guilty of sometimes forgetting my own rule, but it is something to keep in mind whenever you find yourself talking to someone about their work – and particularly if you want them to do something for you."

UI designer and researcher Luke Jones notes that one of the most difficult elements of being a designer is gathering critique, because it can be tricky to remain composed when you're receiving negative feedback. "It is important for a designer to remove their ego from the situation, to remain respectful, understanding and accepting of the feedback, and to try to figure out a way to interpret it in order to create a successful design for the project. After all, this project is not ultimately about you – it's about your users and client."

This article was originally published in net magazine in 2016. Subscribe here.