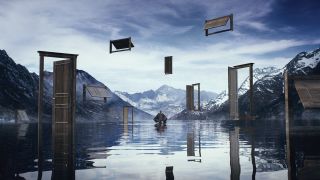 Remember when a movie budget topping $100 million was big news? Today, no one bats an eyelid at those sort of numbers. It's simply assumed that, to have good-enough CG to satisfy the multiplex masses, you have to spend the GDP of a small nation.

Or do you? Every now and again, we'll spot something online that looks like a blockbuster, but was actually made by small team working on a shoestring. Admittedly, we're talking short films, not three-hour epics, but even so, the level of artistry on display can be mind-boggling. You often can't help wondering: just how on earth did they do that?

We chatted to the teams behind four such projects to find out the answer.

"We focused on reducing render time"

The 'small team, big project' phenomenon is most often seen in film festival and competition entries, which every year just seem to get better and better.

Take DREAVELER, an entry to 2018 Pause Fest, Australia's premier creative, tech and business event. It's a captivating, all-CG short, set in a future world where death only happens by means of euthanasia. The subject may be a little grim, but the CG dreamworlds are utterly awe-inspiring. So it's certainly a surprise to learn that its creators, Taehoon Park, Hyunsup Ahn and Jihoon Roh, made the project in their spare time and over the course of just three months.

"We spent one month for the story and animatic, and two months for production," says Taehoon. "We mainly used Cinema 4D for animations and rendering, After Effects CC for colour correction and compositing, and Maya and Marvelous Designer for the character modelling."

So how did they get it all done so quickly? "We focused strongly on scene optimisation and reducing render time," says Taehoon. "I used an awesome GPU-biased renderer called Octane, which is super fast and realistic – I'd totally recommend it to everyone."

But more important than technical shortcuts was having the right mindset, he stresses. "I don't think you need a large number of people," he believes. "As long as they have the ability, two or three people can make great scenes. The important thing is good teamwork."

DREAVELER stands testament to just what can be achieved in your spare time, and that was exactly the thinking behind another inspiring short, created by a small team at Blue Zoo animation studio in London. VIA is a short animated film that tells the journey of life through the use of epic, beautiful environments and meaningful character animation.

"I wanted a project that I could work on during spare moments between work projects," explains its originator, Izzy Burton. You might think that only being able to focus on a project during unpredictable, fragmented moments would prove frustrating. But, says Burton, it was actually helpful to the creative process.

"The short took 18 months to complete," she recalls. "And the benefit of this stretched-out timeline meant that I could leave it – sometimes for a few weeks – and come back to it with fresh eyes and more advice from colleagues and friends, meaning the story and visuals had time to become the best they could be."

Initially VIA had been planned as a one-woman-show project, but as the story became more elaborate and even more characters continued to be added, Blue Zoo brought in a team of 3D artists – Chris Rais, Pietro Licini, Anthony Delliste, Dane Winn and Phil Brooks – along with producer Tom Box and production manager Chantal Baldwin.

Says Box: "One of the main ways we achieved such a high-quality project with such a small team was to embrace the restrictions and see how we could use them as a challenge to how they restricted the storytelling process. This resulted in using very small 3D characters to limit the 2D animation detail required, and forced the storytelling to use the environments instead of relying so much on character performance."

"We just took the time to do it right"

While "embrace the restrictions" is a great mantra for a personal project, there's one area where you may find yourself refreshingly free of restrictions. Unless you have a contest to enter, you could decide not to set a deadline – leaving you free to finesse and perfect your work in a way that just wouldn't be possible when working on a commercial production.

And that's exactly what VFX artist Julien Vanhoenacker found when creating A Drop, a spectacular seven-minute short with shades of Inception, about a man plunging off a tall building into an unknown sci-fi world.

Vanhoenacker started the project as a way of developing his skills as a director, and found the lack of ticking clock hugely liberating. "Most of my projects are TV scenes with tight deadlines," he explains. "Here, though, we just said: let's shoot it, then let's post-process it, and it's done when it's done. So that's how we achieved something that I think looks pretty good, with a small amount of people – because we just took the time to do it right."

The film was shot in Bangkok, partly in a gym and partly in an abandoned building: you'll be astonished by what Vanhoenacker has created for so little money. That's largely due to most people working for free. "If we'd had to bill for it, it would have been, I don't know, $100,000 or something," he admits. "I think in the end we spent around $5,000, of which the post house kicked in a couple of thousand. We had to pay for the operators and the transportation, but got a camera for free. We had most of the gear for very cheap. I think all the actors combined was maybe $1,000."

Going out and asking people to work for free, or for low rates, might sound like a tall order. But Vanhoenacker actually didn't need to; it just happened naturally. "I initially planned a much smaller project," he says, "But then more and more people got interested in joining in, friends of colleagues, friends of friends, and so on. The thing just developed, and suddenly these actors wanted to be in the movie, [and next] this guy wants to DOP it and is providing hardware. I had a whole stunt team that showed up and said, 'Okay, we are going to do it for free.' So the thing got bigger and bigger as it went."

"Have a good, solid plan and stick to it"

Another sci-fi short that people were champing at the bit to help on was SENTiNEL. That's largely because it was directed by Ryan Connolly, who is well known within the industry for his filmmaking web shows, Film Riot and Film State.

In SENTiNEL, a man wakes up in an empty field and discovers that he's being chased by a flying drone, which sets off a desperate race for survival. The artist behind the drone was none other than Andrew Kramer. As the creator of the Video Copilot tutorial platform, After Effects plugin developer and an artist who has worked on JJ Abrams films like Star Trek and Super 8, Kramer certainly didn't need the exposure. But even the most celebrated artists can have their arms twisted for the right project, it seems.

"Originally, when Ryan first told me about the short, I offered to help with the design of the ship," Kramer recalls. "At Video Copilot we'd been developing a new 3D model kit of objects that can be built into various sci-fi vehicles, Element 3D, so I thought it would be a good challenge to make something for a real short. Then, the day before Ryan planned to shoot, his long-time VFX guy took off unexpectedly and he was left trying to figure out a plan. I decided not to leave a friend hanging!"

With the help of two colleagues, Dustin Hudson and Taylor Ellis, Kramer did the 3D ship design and compositing, along with all of the explosion impacts – which equates to over 25 total shots – in a little over two weeks. "Seeing how everything came together was really satisfying," he says. "Constraints on time can really help you solve interesting problems in a positive way, like using heat distortion instead of FumeFX. The key is to make an impact with the shots and I think it added a cool look as well. And for me as the developer of Element 3D, it's rewarding to see the kind of VFX that can come out of a simple plugin right inside After Effects in only a couple of weeks.

And his advice for anyone wanting to emulate their success? "Even when the budget's low, you always want to do a good job," he stresses. "I knew going into it that we'd get inspired and that is a difficult place to try and fight against your own ambitions – especially when there is a deadline and limited resources. So having a good, solid plan and sticking to it as best you can is necessary. The more projects you work on, the better you understand what is possible and how well you can scale projects with additional help."

This article was originally published in issue 234 of 3D World, the world's best-selling magazine for CG artists. Buy issue 234 here or subscribe to 3D World here.