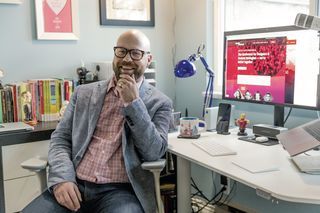 The design sprint, a five-day process for solving, prototyping and testing design problems, was first brought to prominence by Google Ventures and quickly adopted by teams all over the world to improve their products and ultimately their businesses.

Steve Fisher, the founder of Canadian UX, content strategy and web technology consultancy the Republic of Quality, however, noticed one thing was missing from the sprints he saw: content.

“There are big benefits," he explains. "A sprint allows you to leap ahead and see what’s possible without having to spend too much effort and time. But we found people weren’t really talking about content design and how that would help the product.”

Initially, the clients that Fisher pitched the sprint process to were sceptical. It seemed expensive. You needed to allocate four to six people and up to a whole week for it to be successful. However, they soon saw the advantages – especially in content and design, which are at the core of the Republic of Quality ethos.

“Every single time those companies would see a huge saving and gains by the end of the project, because we had done sprints,” Fisher enthuses. “Once that word gets out, it’s pretty compelling.”

The team tackles a lot of tricky problems in large organisations – the key, Fisher asserts, is working together. “There are so many times when teams are separated physically and departmentally. Often, the only time that people of different disciplines come together is when they hand off their work. Getting out of our silos and learning from each other was key for bringing content and design together.”

Interdisciplinary collaboration is one of the big benefits of the sprint methodology. The team might consist of a UX professional, a content strategist, someone from IT or a developer, a marketing person and the business owner or someone who has the authority to make business decisions. These teams are a mix of client and vendor or in-house teams.

The first thing Fisher does in the sprint is to establish a framework that allows everyone to work better together as a team, so they can come to an agreement rather than having to compromise on decisions. “Compromising is easy, ” Fisher explains, “but it leaves behind this terrible underground river of conflict.”

In contrast to GV’s strict approach, Republic of Quality’s sprints tends to vary in length, and will often last just three or four days. “We focus a lot more on content design, to really understand the complexities, ” he explains.

“We might spend the first day digging into the ‘who are you?’ and ‘what’s the problem here?’ Then it quickly becomes about sketching out ideas, so at the week’s end we have a working prototype to test.”

Fisher and his team work with a lot of provincial governments and large municipalities in Canada, as the sprint approach is beneficial to organisations that have complex problems and a huge scale. One project saw the team tackling a four year-old site that encompassed 20,000 pages and more than 100 content authors.

With such mammoth projects, sometimes the result can be completely different to what they initially anticipated. For example, when working on a sprint to make a building permits app responsive, the team discovered that particular app needed to be combined with three other apps in order for people to really want to use it.

“If we bring in external people, who are actually using products, to test and give feedback during these sprints, then we can find the real problem we’re trying to solve. That can be discovered quickly, but only if we bring in diverse perspectives and people from outside your group. We walked away having developed a much better product. It was a turning point for that government.”

The prototype towards the end of the sprint is often created with Bootstrap or something similar, which is user-tested the following week. Fisher’s approach to user testing is to test early, often, and in bite-sized chunks.

“If you test more often with smaller groups, you’ll discover 80 or 90 per cent of the issues right away. When your team witnesses someone struggle or succeed with your product, it’s very powerful. It changes hearts and minds.”

A personalised approach can also have a big impact. “We like to go to people when we can, see them try something out and walk through everyday tasks in their environment, or make it as familiar as possible. If I have a MacBook with me and someone’s used to a PC, I’ll use a regular mouse and change the scrolling to what they’re used to. Little details like that  make a difference when user testing.”

Fisher argues that often we get too bogged down in our tools, and sees the current fragmentation of tools as a big problem for web industry. The likes of Grunt, gulp and webpack might work for some people, but don’t fit well for others.

“There’s this sense you have to learn all the things, now, which can result in too much distraction,” Fisher laments. “It’s essential to be a lifelong learner, but we also have to learn focus and accomplish our tasks. There are so many things out there for us to know and learn and keep track of.”

He suggests designers and developers view the situation as an opportunity to discover products that will help them in their workflow. “We should talk openly about how we work. If we share with others what kind of system we develop with, for example, it will help our community learn.”

Another, perhaps more persistent, issue plaguing the web industry is its lack of diversity. “It’s probably not going to change for a long time,” Fisher sighs. “We don’t have nuanced teams because we only have a narrow amount of voices in a lot of companies, and especially in leadership.”

Fisher points out that the different voices, perspectives and ethnicities represented was what attracted him to net’s Generate conference. When conferences embrace diversity, everyone who comes across that event – in person, on the website, on social media – can see they themselves are represented on that stage.

“White dudes in the tech and design industry never go through ‘rep sweats’. They never feel they’re not represented,” Fisher notes. “We’re represented everywhere! If you’re a person of colour in America, you’ll have a different experience in life, and you won’t have the same experience of privilege.”

The web industry needs to continue to acknowledge its diversity problem. “Most people of privilege, white folks like me, get more opportunities more easily. I’ve seen that in my own life. It’s important I use my privilege to help the less privileged, the vulnerable in society, and not myself.”

It’s no surprise diversity is a crucial ingredient of Fisher’s own conference, Design & Content. But this was not always the way. “When we organised the first conference, we had more women than men speaking, but one perspective producing the experience. A white perspective, which resulted in 80 per cent of the speakers being white. We were well intentioned, but we messed up,” Fisher admits.

“It wasn’t until someone challenged us on the lack of diversity in our speaker roster that we recognised we needed to do better.”

Fisher decided to address the problem by putting together a diverse production team for the event, including people from a range of gender perspectives, backgrounds, ethnicities and age groups. Everybody has an equal voice and everyone is paid for their time. The process is documented on the studio’s blog.

“It changed everything for us. One of our team has mobility issues and attends the conference, so her perspective helps us plan for others. I wouldn’t have known; my biggest mobility issue is that I’m 40!”

Fisher believes that introducing a similar focus on diversity and inclusion into tech firms would make a big difference to how these companies work. “We’d have the possibility of teams that represent a truer picture of diversity we see in the world,” he says.

Diversity, it turns out, can improve every aspect of our industry, from product testing to conferences. The more diverse your company, the more views you can use to inform your product design and content decisions, which ultimately will result in happier (and more) customers.

This article was originally featured in net magazine issue 291.