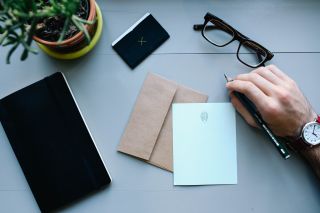 You may have heard about the fancy business card that describes a man who washes dishes at his local café as an ‘underwater ceramic technician’. I like this – I see it as a poignant poke at the over-elaborate, exaggerated and increasingly meaningless job titles we see more and more – especially in the creative industries.

Ridiculous job titles are not a new phenomenon, though. They've been around a good while, lingering and flaring up every now and then like an annoying virus. Right now we seem to be in the throes of an epidemic. And it's probably not because people are able to make their own business cards and job titles with business card templates.

Why do I care? Well, I’ve been in the business of design and branding a long time, and I’ve always believed that a big part of a designer’s remit is to provide clarity – to ease the flow of complex themes and subtle messages without ambiguity or over-statement. You’d think the design profession would take the same approach to its own nomenclature, yet in many baffling and occasionally amusing cases, you’d be very wrong.

The end of transparency?

Since the 1990s, using pseudo-intellectual, jargonistic terminology to describe everything from basic client services to long-established design processes has been on the rise. Today it’s at full crescendo, and arguably the worst afflicted is the straightforward job title. Don’t take my word for it – ask a 2019 ‘creative’ what they do. Better still, ask for their business card… then you have proof.

In an age where transparency, and a straight-talking and approachable tone of voice are the preference of the most enlightened brands (because such things work wonders and always did), it seems contrary to have job titles like head of brand provocation, growth hacker and ignitor. Yes, these are real, and they baffle, frighten and anger me. What are these people thinking? More importantly, what do they actually do? Ask a passer by, and I bet they pull a funny face, and say, ‘a what?’

I’ll go as far as to say many industry folk don’t really know, either. It seems to be an attempt at conveying niche expertise, or perhaps people just think designer or client services manager isn’t cool, mysterious or sexy enough. Imagine telling your mum you’ve just been promoted to chief visionary officer – and her look of bewilderment before she says ‘sounds like fun, dear’ and asks, ‘what does that mean?’

What was so bad about being a production manager? People know what you do (manage production), so you don’t have to explain – and no one ever calls and asks to speak to the growth hacker.

The 'say it out loud' test

If you want grandiose or specialist job titles, at very least consider what it’s like to say it out loud – and beyond the clique. What might sound almost acceptable in a soft Southern Californian twang, in a San Francisco creative hub, or vaguely impressive in a middle-class Manhattan drawl on a conference call might not come across the same in, for example, my broad UK Lancastrian. If I say 'head of realisation', it sounds more like 'Ed oh reeli-zayshun'. If I said it at the school parents’ evening, to an inquisitive teacher, they’d think I was mad.

Whose bright idea was it to re-brand ‘thinking’ as ‘ideation’? Who promotes the practice of 'design thinking' as 'conceptual innovation'? Who thinks having folders of themed images makes them a 'curator'? I understand the desire to make one’s role sound more impressive, but not to the point where it’s a) wholly unclear what you actually do and b) embarrassing. What’s wrong with being a really good artworker, as opposed to the only and lonely 'minutiae-focused ante-output oracle' on the planet?

I think I have an idea what’s happened. Somehow, our industry has lost the distinction between an emotive brand name and an informative descriptor. Kellogg was a bloke looking to sell cereal in a box, and he named his product ‘Kellogg’s Cornflakes’. A brand name and a descriptor, and the rest is history. British paint company Ronseal produces such a variety of wood-care products (from ‘one-coat-fence stain’ to ‘high-gloss interior varnish’ and everything in between) that it’s almost impossible to have a tagline that encompasses them all. So it simply proclaims, 'Does exactly what it says on the tin'. Brilliant.

But doesn’t it come to something when a tin of gloop can teach the design industry a lesson? Why present a potential client with an at-best ambiguous, but more likely baffling explanation of what value you bring to the table?

I don’t see what’s wrong with enjoying professional life simply as a designer or artworker. In my own companies I’ve successfully championed doing away with the junior, middleweight and senior tags, as they don’t really add anything anyone else needs to know. In other capacities I’ve had colleagues who simply had ‘Strategy’ or ‘Client Services’ on their business cards and email signatures, and I honestly can’t recall any of them being questioned about their seniority, or what their role entailed. Their work built a reputation that spoke for itself.

Likewise, I see no place for a VP in a small design agency, or for corporate CEO and CFO acronyms in our industry unless you’re a monster outfit. Someone once told me, ‘oh, that’s essential when negotiating with senior stakeholders in the Asian market'. I don’t believe that one bit. And even if were true, it shouldn’t be encouraged.

Perhaps it harks back to the 1990s' obsession with trying to identify a formula or process that more or less guaranteed risk-free and successful innovation and design, and then to package it up in a memorable phrase and sell it to gullible marketers. This spawned a fog of proprietary processes that now includes the gratuitous ‘Store Safari’, the frankly indecipherable ‘Mettle Thinking’, and the profoundly preposterous ‘Imagineering™’. To me, today’s ridiculous job titles are a hangover from this.

They do not impress or inspire people; insight, creativity and communication skills do. It’s the quality of the work that matters, and the impact it has that counts. Surely being the best at what you do, individually and collectively, is more important than trying (and failing) to sound clever.

Good communication has always been about clarity and simplicity. It engenders approachability and trust in any industry, but especially in the creative sector. Please, let’s not spoil that with cheesy grandeur!