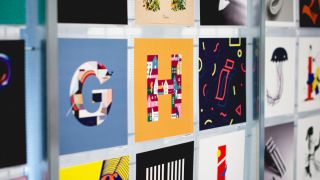 The guys at Creative Bloq asked me to expand upon this snarky Tweet of mine from a couple of weeks back:

Kind of dread the crimes against typography that the annual 36 Days if Type floods my Instagram feed with.April 9, 2018

I immediately felt bad. Like I’d kicked a dog. But not everybody can like everything, that’s fine, let’s get past that fact. What I had trouble reconciling however, was precisely why I didn’t like 36 Days of Type.

If nothing else it provides an interesting snapshot of design styles/tastes as they stand (however questionable). So instead of just taking more time out of my life to talk about things I don’t like, I thought I’d use it as an opportunity for introspection and self-evaluation.

I had a bit of a bad break up with the whole type-made-of-stuff thing a couple of years ago. It’s ok. We had a good run. I was on TV a few times, in some magazines, gave some talks.

But I kind of ran out of ideas worth exploring, and all the while, the whole field had become so saturated that I didn’t really need to explore it myself. Just Google it and someone has probably already done it by now – especially with places like Hand Made Font popping up. You know there’s actually a handful of designers who only make type out of food now? For a living. Can you imagine?

Either way, without that feeling of breaking new ground the gloss wore off for me, so I’m pretty much just a regular designer these days and reserve the exploratory stuff for personal projects.

Well, firstly, designers are annoying. We just are. Especially en masse. A lot of people take comfort from feeling like part of a community – by attending mixers, seminars, networking events and using co-working spaces and so on – whereas for the most part I’m exhausted by it.

Secondly, I’m really busy. Why isn’t everyone else? I have a wife, two beautiful children, friends and an independent studio to run, and I tend to forget that, in my twenties at least, I was happy to give over my evenings and weekends to scanning in hair or blossoms or anything else I wanted to make an alphabet out of. So maybe this annual thing just reminds me that, in the words of Ferris Bueller, life moves pretty fast.

As an addition to that, here’s a metaphor. I’ve come to realise that I really like the beach, but I don’t want to be on the beach every day. And I’m actually suspicious of people who are in a ‘what else have you got going on in your life?’ kind of way. And worse than that, being on the beach all the time day is bad for your skin (portfolio) and ages (limits) you.

Thirdly, I don’t believe you can make something worth sharing with the world every day. I just don’t. I share less than 1/10th of my own output (and yes I know, 3.6 days of type is less interesting/catchy), but I think editing one’s work is an important skill to master. So to that end, unless you’re beyond proud of this thing that you made, I’m not sure it’s worth putting out there and as a result, I find the 36DOT bar to be pretty low.

Fourth, it reminds me that there’s not enough work to go around. When I started out with my own typographic adventures more than fifteen years ago, the scene was much quieter. I would regularly find myself among the same few names at the top of a brief, and the typographic renaissance of the last 10 years – and, lets be honest, fetishisation thereof – has seen a generation of designers all setting out to do the same thing. But, like, all the time.

Go your own way

This, I think, is exemplified by 36DOT whereupon you can find dozens upon dozens of executions all treading on each other’s toes visually. Glossy, extruded, Cinema 4D letters; CGI paint textures in mid air; bad calligraphy; type made from lentils or some other cupboard ingredients… and all generally at a comparable level of finish. Begging the question - what on Earth does one have to do to stand out in this field anymore…?

I know, that’s a lot to unpack. So thank you for being my shrink today.

Confronting my demons I can surmise that 36DOT probably isn’t a bad thing for those who enjoy taking part, but equally, it doesn’t hurt to not take part in things either. If everyone else is doing something, usually it’s time to not do it.

[Header image from 36 Days of Type]