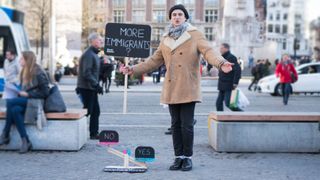 Some of the most exciting speaker sessions of Design Indaba 2018 came from the global graduates. Throughout the three-day creative conference, 10 hand-picked young designers – all of whom are making waves in their respective fields – took to the stage to share their ground-breaking design work.

Here, we bring you six of our favourite projects and introduce you to the designers behind them. Make a note of their names: these are tomorrow’s design stars and you’ll likely be seeing them again.

Named Thomy, the kit is designed to facilitate the administration of insulin into the body. It features an insulin pen that’s been ergonomically designed for a child's hand. And it uses playful, non-toxic temporary tattoos to help children remember where they’ve injected insulin before.

The idea is to help kids aged four and over manage the condition by bringing a sense of fun and intuition to the process, reducing any fear of needles and creating a product that children would be proud to carry in their backpack.

And it seems Souza, who’s a graduate of the Parsons School of Design in New York, is onto something: last year Thomy was a United States national finalist in the James Dyson Award 2017.

02. Shaakira Jassat: thirTEA for ONE

For every 150ml cup of tea made, 30l of water is required throughout the chain process. That’s according to South Africa-born and Design Academy Eindhoven graduate Shaakira Jassat, who created a ceramic installation, thirTEA for ONE, to illustrate the dramatic hidden waste associated with the deceptively simple daily act of making a cup of tea.

Jassat’s installation highlights the amount of “virtual water” used to make one cup of tea with a series of ceramic cups connected in an inverse pyramid. The top cup requires constant water until the very bottom cup is filled.

The project was particularly poignant at Design Indaba this year, given the water crisis currently being faced in Cape Town. "We take a lot for granted," she says. "That is, until it is gone forever... Water is our most precious element and it is contained in almost everything around us. Sadly, water is scarce."

Japanese design researcher Tomo Kihara aims to challenge and reframe issues in society through playful intervention – and he’s received international recognition for his efforts. His project Phonvert, which urged people to find alternative uses for their old phones and reduce material waste, was nominated for Design of the Year 2016 by the London Design Museum. And Kihara is a 2017 WIRED Creative Hack award-winner too.

More recently, Kihara – who’s studying for an MSc in Design for Interaction at TU Delft in the Netherlands – has been looking to create a social alternative to begging, by encouraging conversation around a topic of public interest in exchange for donations. The idea, he says, is to allow homeless people to earn money without sacrificing their dignity.

His project Street Debaters aims to break too stigma of being on the streets by using a set of scales to pose topical ’yes’ or ‘no’ questions to the public as they walk past. For example: “Is Brexit ok?”, “Trump or Clinton for president?” and “Latest Harry Potter film – good or bad?”

People passing by are encouraged to drop a coin into the side of the scale they identify with. The results? Not only did the project spur more people to make a financial contribution – Kihara found that homeless people were able to make up to £13.50 per hour – it also sparked conversation, with 12-13 people stopping every hour to chat.

“Now people are talking about politics and Star Wars – and not about being homeless,” says Kihara. “Equal conversations are essential to keeping one’s dignity. Now people aren’t invisible.”

Want to get involved? You can download the open-source design files to make your own scales from wood, cardboard or paper.

Fed up of the fashion’s linear economy - fashion is the world’s second most polluting industry, with most clothing ending up in landfill – Gosiewski and her team have created a highly flexible, rapidly renewing biodegradable yarn from kelp.

Not only can the bioyarn be woven into apparel, when you’re finished with the item of clothing, it can be easily broken down by microorganisms and fed back into the earth.

“Kelp is one of the fastest growing organisms on earth,” explains Gosiewski. “It’s available globally and sourced sustainably and there’s a lot around.”

“When [the clothing] is worn out, or you don’t want it, it can be broken down by microorganism and the nutrients reclaimed to feed the next generation of product,” explains Gosiewski.

“We see our material beyond just fashion,” she adds. “There are more possibilities. We developed the yarn – we’re excited to see what people make with it.”

Read more: Why your next shoe could be made from seaweed

He might be only 19, but Leroy Mwasaru already boasts an impressive CV. The social entrepreneur is the founder of Greenpact, a social enterprise providing bio-gas solutions to the nine million Kenyan households (that’s 72 per cent of all Kenyan households) struggling without access to affordable renewable energy and proper sanitation.

Product designer Simon Dogger created the Emotion Whisperer after losing his sight and finding himself unable to read body language. When in conversation, the tool translates the emotion of the person through a series of subtle sensory signals.

The product comprises a set of glasses with a built-in camera, an “emotion recognition” app – which uses facial recognition technology and algorithms to detect the intensity levels of the base six emotions: happiness, fear, anger, sadness, disgust and surprise – and a small, handheld device.

The app analyses and translates any emotion detected into a sensory signal, and instructs the electronic device to give out a specific vibration. That means that with Emotion Whisperer, a user can effectively feel someone smiling.

“My work is about turning emotions into haptic signals. With Emotion Whisperer, you can feel someone smiling,” says Dogger. “My job is to make something that turns around the quality of the dialogue, and the quality of life.”