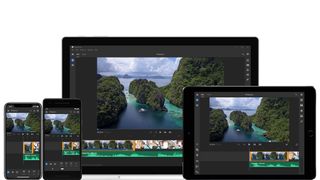 Some big news at Adobe MAX 2018 today is that Adobe's long-awaited video editing app, dubbed Project Rush, has finally been released. The newly christened Premiere Rush CC promises an intuitive, all-in-one experience that will make it easier than ever to create professional-looking video content (even if you're not a video expert yourself).

Video dominates the internet – you know that, we know that, Adobe knows that, which is why it's been busy working behind the scenes to develop a new tool that reimagines how we create and share online video.

Users can capture video, edit it using simplified colour, audio and motion graphics tools, then publish it to social media, all within Premiere Rush CC. With cloud integration, you'll also be able to access your video projects anywhere, on any device.

Rush harnesses the power of its sister apps, Premiere Pro and After Effects, as well as giving users access to professionally designed motion graphics templates in Adobe Stock to get started quickly. Powered by Sensei, Adobe's AI technology, Rush has a one-click auto-duck feature to adjust music and normalise sound. Users can switch seamlessly between different desktop and mobile devices as they create their video projects, and the results are optimised for social distribution.

We'll update you with any news on Premiere Rush as it becomes available. However, it is worth considering the impact this might have on professional video editors. While there's no doubt Rush makes video editing a cinch, we don't think pros should worry just yet. While this new tool might mean we're seeing much more professional-looking Insta posts in the not-so-distant future, what it won't teach is a vital skill of video production: how to tell a story. Find out more on the app homepage.

The tool was first announced in June 2018, and is now available for immediate download. It's currently iOS-only, although Adobe says Rush for Android will follow next year. Premiere Rush CC is included in the CC All Apps plan (sign up for Creative Cloud here), or is available from $9.99/month. Alternatively, you can make use of the free Premiere Rush CC Starter Plan, which will give you access to all Premiere Rush CC features, but you'll only be able to export up to three projects.

Below are more details of some of the other apps affected by the latest CC update. Want to sign up? Make sure you check out these top Adobe deals first.

Adobe Spark Post is a free online social media graphic design software that enables you to add text, apply filters, resize, crop, and rotate photos. Adobe Spark Post was previously available on iOS devices and the web, but Android users will be pleased to learn that, as of today, they can finally join the party.

This gives users access to any preset purchased on any device, enabling photo editing anywhere and everywhere. This release also includes additional new features in the Windows and Mac desktop apps and iOS and Android mobile apps, two new Technology Previews, and an update to Lightroom Classic.

Following the Adobe XD May release, including the launch of the free XD CC Starter plan, Adobe is updating the platform with Overlays and Fixed Elements (see video above); improvements to viewing, interacting and collaborating with shared prototypes and Design Specs; a new maths calculations feature; and design feature enhancements.