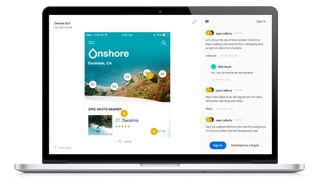 This is a breakthrough end-to-end solution for UX design on Windows, and with Adobe's research finding that demand for designers focussing on delivering a sleek user experience will increase by 73 percent in the next few years, it couldn't have come at a better time.

The key updates to Adobe XD are broken down into four parts. First up are pinned comments, which allow stakeholders to pin comments to a specific section on an artboard in a shared prototype. This feature is available for both Mac and Windows initiated prototypes.

Next on the list are Scrollable artboards on Windows 10. These let designers scroll through long artboards in the Preview window or in a shared prototype to show the full content of their designs.

Also on Windows 10 are blur effects, which enable users to blur a specific object or an entire background to change the focal point of their work. Finally, SVG export on Windows 10 lets users export design assets as SVG files. When users export to SVG, they can also choose to export them with embedded or linked images.

These updates aren't the end of the line for Windows updates, though. Over the next few months Adobe will continue to bring Adobe XD for Windows in line with the Mac version while investing in the system as a whole.