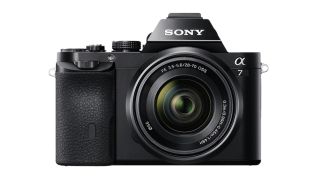 Amazon UK's biggest ever August Bank Holiday sale is in full swing, and today it's presented one of the best deals we've seen so far. This full-frame compact Sony A7 camera is now just £649 after cashback - that's over 50 per cent off the retail price.

The first full-frame compact system on the market, the Sony A7 recently featured among Amazon's incredible Prime Day deals, but many were left disappointed as they flew off the shelves. But your luck is in once again, as Amazon has slashed the price of Sony's original A7 camera and FE 28-70mm f/3.5-5.6 OSS lens kit to just £799 (RRP £1,549.99) – and with Sony offering a further £150 cash back, the price of this full-frame camera drops to a staggering £649.

The A7 has been superseded twice now since its inception, with later models boasting the addition of competitive features, such as touchscreen functionality and 4K video, but the fact that Sony has continued to sell it alongside its younger siblings shows its worth. Fully equipped with a 24.3MP Exmor CMOS sensor, the A7 produces incredible Raw images, making it a fantastic first-time full-frame buy for any aspiring photographer.

The Amazon August Bank Holiday sale runs until 29 August, but we don't expect these Sony A7's to hang around for long so grab one while you can. The sale is open to everyone in the UK, but Amazon Prime members – and anybody signed up to a free 30-day Prime trial – will benefit from a 30-minute early access period to all Lightning Deals. These are quick-fire offers where products become available at a discount, in limited quantities, for limited period of time. Want more deals? We've got the best Amazon offers for artists and designer right here.

Deal subject to availability, cashback claimed via Sony post-purchase and subject to T&Cs.