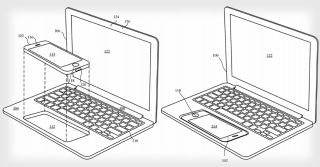 Is a new breed of Apple device just around the corner? If the recently published new Apple patent is to be believed, it certainly looks like it. Filed in September 2016 and released 23 March 2017, the 'Electronic Accessory Device' looks set to turn iPhones into fully-functioning laptops.

There's a dock built into the surface of the accessory that users can plug their iPhones into directly, which means shoppers may no longer need to buy a separate phone and laptop.

TL;DR: Stick your phone into this little laptop and fire it up like an iMac.

From the two patent illustrations we can see how the iPhone drops into the dock space where the touchpad usually sits. This turns the iPhone itself into the laptop's touchpad, with both presumably running the same operating and file systems.

While the patent outlines that the device has next to no independent processing capabilities, it does suggest that the accessory could pack auxiliary processing resources such as a graphical processing unit. With this capability, the iPhone-cum-laptop could change how graphic designers work by allowing them to create on the fly and directly from their phones.

As with any patent like this, the likelihood that the idea will see the light of day is uncertain. But with the iPad included in the same patent, if Apple decide to proceed with this it looks like a range of devices will be catered for.