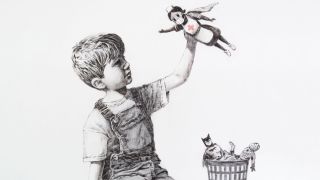 A new artwork by Banksy has appeared in a hospital corridor, paying tribute to NHS workers. The piece, entitled Game Changer, is currently on display at Southampton General Hospital, and was hung near the emergency department in collaboration with the hospital managers.

The (almost) monochrome painting depicts a young boy kneeling and playing with toys. His chosen doll, rather than Batman or Superman (who remain confined the wastepaper basket), is a nurse wearing a cape, an apron bearing the red cross emblem and a face mask. With masks in short supply, don't forget to check out our guide to where to buy a face mask right now.

The piece appears to mark a slight departure from Banksy's signature biting political commentary, instead conveying a simple message of appreciation. Along with the artwork, Banksy left a note of gratitude for hospital workers: "Thanks for all you're doing. I hope this brightens the place up a bit, even if it's only black and white."

"Here at Southampton," said Paula Head, chief executive of University Hospital Southampton NHS Foundation Trust, "our hospital family has been directly impacted with the tragic loss of much loved and respected members of staff and friends. The fact that Banksy has chosen us to recognise the outstanding contribution everyone in and with the NHS is making, in unprecedented times, is a huge honour."

It's been a busy year for Banksy so far. His latest piece of street art popped up in Bristol on Valentine's Day (but was vandalised a few days later), while another piece received a timely face mask last month – the jury's out on whether than was actually him, though.

Not even lockdown has dampened his work ethic – his own bathroom recently became a canvas (much to his wife's chagrin). If you fancy some urban inspiration, check out our favourite street art examples from around the world.