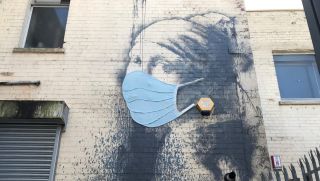 The earring is no longer her most notable accessory. (Image credit: Bristol24/7)

A Banksy mural in the mysterious street artist's native Bristol has received a rather topical makeover over the past few days, as spotted by various Twitter users. Girl With A Pierced Eardrum, on Albion Docks in Hanover Place, is now sporting a surgical face mask – presumably to protect her from the spread of coronavirus.

Masks might be in short supply right now (take a look at our guide to where to buy a face mask), but the Girl With a Pierced Eardrum is clearly in the know. It's not clear when the mask was added, but photos began appearing on Twitter yesterday (below).

A new adornment to Banksy’s Girl With A Pearl Earring in Bristol pic.twitter.com/tuDQhiOU03April 22, 2020

It's also not clear whether Banksy is responsible for the update, or another would-be vigilante artist. But a recent update from Banksy himself suggests the face mask might not be his doing.

In a post shared to Instagram last week, Banksy revealed that he had been "working from home" (much to his wife's chagrin – we didn't blame her). A series of photos (below) showed a mischievous pack of his signature painted rats wreaking havoc in his own bathroom. If Banksy is resorting to using his own home as a canvas during lockdown, we assume he isn't then roaming the streets adding masks to his existing artworks.

. . My wife hates it when I work from home. Banksy

Girl With a Pierced Eardrum, which first appeared in 2014, is a parody of 1655's Girl with a Pearl Earring, by Johannes Vermeer – in place of said pearl earring is a security alarm. Some Twitter users have expressed concern that the 2014 work could have been damaged by the addition of the mask. This wouldn't mark the first time the artist's work has been vandalised (his recent Valentine's Day piece was destroyed in mere days).

Hopefully, like coronavirus itself, Girl With a Pierced Eardrum's mask is only temporary. No doubt we'll find out soon enough whether the artwork has been preserved underneath – it'll probably be unmasked long before Banksy is.