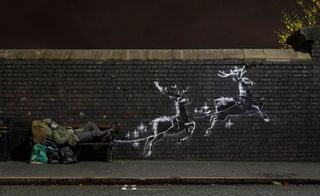 Banksy's latest piece has appeared in Vyse Street in Birmingham, UK, and as per usual, the anonymous street artist's work is already causing a stir. The artwork shows two reindeer painted on a wall next to an existing bench, giving the impression that it's pulling the bench like a sleigh. The bench is occupied by a homeless man, who happens to be sporting a big white beard. Does that remind you of anyone?

But, is it a genuine Banksy, and potentially worthy of inclusion in our top street art post? The style is right and the artwork has made an appearance on the artist's Instagram page with a poignant message. Read Banksy's words and watch the video below.

. God bless Birmingham. In the 20 minutes we filmed Ryan on this bench passers-by gave him a hot drink, two chocolate bars and a lighter - without him ever asking for anything. Banksy

If that is not enough to convince you then there's also a photo of the reindeer artwork on front page of the artist's website. And the selfies are already rolling in, such as the one below from  @AmandaGChan.

So what's the message behind his latest artwork? The beauty of Banksy is that he says little and lets the masses make up their own mind on exactly what his work means. To different people his work means different things.

The timing of the artwork's appearance, the reindeer (and the white beard) suggest that we should all be thinking of others as the cold dark nights set in. Alternatively, with Banksy being something of a political activist, and the UK general election happening this week, it could also be a dig at the party in power and its record on homelessness.

Whatever the intended meaning, as usual, Banksy has got many people thinking, retweeting, liking and spreading his message across the web to the wider world.