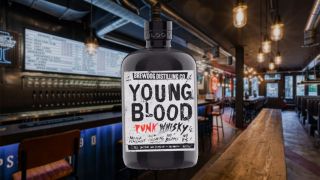 If you're having a bad day at work, spare a thought for BrewDog's James Watt, who thought it would be an excellent idea to share an early preview of the packaging design for the company's new Young Blood punk whisky on Twitter.

Getting feedback on a work-in-progress design can be a great help, especially at that point in the process when you're so close to the work that you're unable to look at it objectively any more. A fresh pair of eyes on your project is often just the thing you need to help clarify what's working and what isn't.

Of course, it depends on who you ask. Some trusted colleagues would be a good choice. Posting your work-in-progress up on Twitter, on the other hand, is a slightly riskier proposition; we all know how reasoned and thoughtful the discourse is there, right?

You might infer from the fact that we've posted a screengrab of his tweet, rather than simply embedding it, that it may not have gone down too well. And you'd be right.

BrewDog has had its fair share of misfires along the way – let's not forget its ill-judged Pink IPA – but it can generally be relied on to produce some great-looking packaging for its products, with plenty of strong typography, bold graphics and good use of colour.

Its whisky design, though, seems to miss the mark, with a black bottle obscuring the contents and a label that looks like a photocopied flyer for a punk night in the back room of a pub. Naturally, Twitter users were quick to point out its shortcomings with a slew of critical tweets, variously describing it as "tacky and cheap" the "middle aged Dad of whisky bottles", "as edgy and punk as Songs of Praise", and looking "like $7 mystery booze that might put you blind".

Screams tacky and cheap to me. If I'm buying a bottle of whisky I'm not looking at that. Sorry.August 3, 2019

If you are messing around, you’ve certainly achieved a mess. This is the leather jacketed, sport car driving, recently divorced, middle aged Dad of whisky bottles. Also don’t brag about not adding colour then fail to show the colour.August 4, 2019

Harsh but fair. We do rather like this alternate design put together by Fun Creative Agency, though:

And as if all the hate for the design isn't enough, BrewDog's also come under fire from whisky Twitter, which seems to be just as irritable as design Twitter and even more pedantic. From a whisky point of view, BrewDog couldn't be doing it more wrong.

There's no mention of Young Blood's whisky category (i.e. whether it's blended, single malt, single grain and so on), no age statement and, to top it all, the type for the bottle size and strength might be slightly too small.

Unfortunately it’s not Scotch Whisky Association compliant, there is no whisky category, and the 70cl and 40% look less than 4mmAugust 4, 2019

It all adds up to quite the perfect storm of Twitter fury, and while BrewDog's usually happy to ride these things out when it gets people worked up, that's not the case this time around; Watt has simply deleted his tweet. Whether that means BrewDog is going back to the drawing board with this remains to be seen; watch this space.