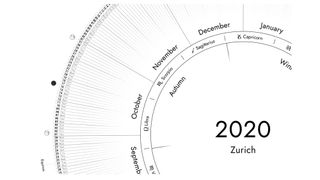 How do you visualise the year in your mind's eye? For some it might stretch ahead in a straight line, for others it's a straightforward calendar grid. But for those who see it as a circle, a serious 'wow' moment is coming your way. A circular calendar design has been shared on Reddit, and it's a revelation.

The calendar works in a similar way to a clock, with January situated at the top of the circle (where the 12 would be on a conventional clock), and other months following the circle clockwise incrementally. Much like a clock, the longest unit of time is towards the centre of the circle, with the smallest out at the edge, so the year is at the middle, followed by the seasons, the signs of the zodiac, the months and finally the day and date (the moon cycles are also found around the edge).

We're so taken by this calendar that we're already busy replacing our current, more traditional design. But if it doesn't float your boat, don't miss our calendar 2020 round up for options to suit all tastes.

I designed a circular annual calendar from r/Design

The way we view the year and how vividly our brains visualise the way the months are laid out can vary wildly from person to person. Even the creator, alexbonair, has a totally different concept of the direction the months should run in, "mine goes counterclockwise as well, but as most people prefer clockwise."

If you disagree with alexbonair on direction (we do not), you can always adjust it, as he suggests: "I wrote a VanillaJS script that draws the calendar, based on some input param[e]ters. Year, language, direction and much more is easy changeable."

Just how differently we all see the year is abundantly clear from reading the Reddit comments, which contain a lot of enthusiasm and some wildly different opinions. Livingchair, for example, sees the year as an oval, "Haha it's always fun to see how people imagine the concept of year in their heads. My year is oval shaped, but it goes counterclockwise and summer is on the top-side."

However the year might appear in your head, this design concept is a winner. It's clean and functional (and actually presents what has been inside our heads all this time). It's a game-changer, just like this cascading ruler shared on Reddit not long ago. You can't ask for more than that. Except for spaces to write down important dates, but maybe we just need a more traditional calendar to go alongside it.