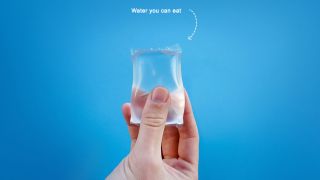 The 24th annual Design Indaba has come to an end and, while the conference saw inspiration of all shapes and sizes, the key theme this year was very clear: change. Speakers discussed innovative and creative ways to make the world a better place, and showed how design can not just to repair the damage to the earth humans have caused so far, but actually prevent more harm.

Creative Bloq was lucky enough to have front row seats at the leading design conference this year, witnessing a number of professional and graduate designers present truly groundbreaking ideas, all with the same goal: to help promote change to better people's lives through design. Here are some of the highlights and key takeaways.

One of the first and very obvious issues to come up was the ever-growing plastic waste crisis. But instead of the usual feeling of desperation that surrounds this subject, the ways in which creatives are trying to tackle it led to an overriding sense of hope.

Dave Hakkens is a designer from the Netherlands who feels so strongly about plastic, he created a bespoke recycling machine and tools that enables him to turn the material into something new. And he hasn't stopped there. Releasing the blueprint for the machine and tools to the globe online, he's now created a growing community of people doing the same, all in the fight against plastic pollution. Hakkens' Precious Plastic army is growing every day, as more and more people commit to reducing this waste.

Another designer keen to tackle the issue of plastic is Design Academy Eindhoven graduate Mirjam De Bruijn, who is currently working to transform household items like cleaning detergent, dish soap and shampoo into powder, bars and liquid capsules, saving on huge amounts of unnecessary plastic packaging.

Co-founder and co-CEO of Skipping Rocks Lab, Rodrigo García González, also took to the Design Indaba stage to share his goal of making packaging disappear. Gonzalez introduced his edible water bottle, Ooho, much to the delight of the audience. He then went on to share his formula for making a creative idea a success:

Improving the world through design

But plastic wasn't the only issue being addressed. Designers speaking at Design Indaba did a fantastic job of not only highlighting other problems, but also providing highly innovative, viable solutions.

There was everything from bio-coffins that help humans return to the earth in the most environmentally friendly way, to mind management technology helping us deal with the pressures and stresses of every day life, and a new concept blood glucose meter for people with diabetes. The latter combines state-of-the-art technology and a thoughtful two-stage feedback method, making the test less stressful and potentially less intrusive.

All leading the way in their respective creative field, these designers demonstrated a clear commitment and passion to making these mind-blowing concepts a reality. You can find out more about these new innovative designs here.

As we mentioned earlier, Design Indaba had inspiration aplenty, which included keynote speakers such as Ane Crabtree of The Handmaid's Tale costume fame, advertising guru David Droga and renowned architect John Pawson. And they did not disappoint when sharing their inspirational journeys into the creative arts.

The auditorium fell dark and silent as Crabtree's session started, with the curtain lifting to reveal an actor reading an excerpt of Margaret Atwood's The Handmaid's Tale. Crabtree then made a dramatic entrance, dressed in a white boiler suit, and captivated the audience for the entire 40-minute slot talking about how her upbringing in a multi-racial family in a small town in Kentucky has ultimately informed her design and career choices.

In stark contrast, legendary architect John Pawson firstly forgot the clicker to operate his presentation, and then asked the technicians for his notes, which were already on screen in front of him – all of which was taken in good humour by both Pawson and the audience.

Pawson's career is quite extraordinary, especially when you consider he didn't think his dream of being an architect would ever be realised. "In my heart, from a young age, I always knew what I wanted to do," he said. "But because I thought you had to be good at maths, I believed architecture wouldn’t be for me."

How wrong he was. Pawson shared countless images of the beautiful buildings and spaces he has created, including some of newly designed Design Museum in London, commenting: "If I were to characterise my architecture, I would say I try to create calm, simple spaces. No matter what the project, it is always rooted in the theme of minimum."

Design Indaba is renowned for bringing together the best creatives, in every discipline, together from all over the globe. And 2019 was no exception. From the inspirational speakers and workshops to exciting new music and film screenings, the conference really set the bar high in terms of showcasing the best of the global and African creative industries. Next year marks Design Indaba's 25th anniversary, and if 2019's event is anything to go by, we already know it'll be one not to be missed.