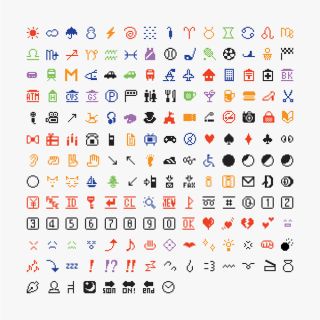 Here's a story that will make you smile. The team at independent publishing imprint Standards Manual have just launched a Kickstarter for a book and smartphone keyboard dedicated to the original emoji drawings (above).

Simply titled Emoji, the book will study the 176 icons designed by Shigetaka Kurita and released by Japanese telecommunications company NTT DoCoMo in 1999. This includes a look at the 12 x 12 pixel grid drawings made by Kurita, which were acquired by New York's Museum of Modern Art in 2016, as well as technical data for each character.

Given that emoji have become such a common part of everyday communication, it's fascinating to track the ancestry of useful icons we're now all familiar with.

Kurita was just 25 when he was tasked by NTT DoCoMo to create illustrations of faces, objects and places in only four to six weeks, but his creations have gone on to spawn thousands of variants over the years.

"Various things influenced emoji," explains Kurita. "One was the pictogram. Pictograms are used as signs in many places in Japan like stations and public places. The second was the Japanese art of manga, which uses graphics to express emotion. Lastly, it was Japanese magazines. All of these things that organise and communicate information came together to influence the creation of emoji."

Alongside the book, Standards Manual also hopes to launch a keyboard extension, available for download in the App Store and on Google Play, which will allow users to send the original emoji. For people in the Western world, this will be the first time they have access to these groundbreaking icons.

"As graphic designers, we have become fascinated by the occurrence of accidental masterpieces," say Jesse Reed and Hamish Smyth from Standards Manual. "Mr. Kurita did not set out to create work that would be acquired by MoMA – he was simply working on the assignment that he was tasked with. But inadvertently, he has created what we consider one of the most influential designs ever created."

If this project is making you feel all heart-eyes emoji, be sure to head over to the Kickstarter page and make a pledge.