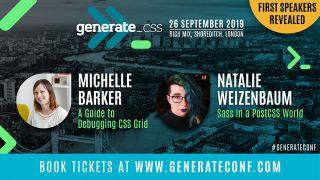 Launched just a few short weeks ago with a fresh new format, Generate CSS is a concentrated conference offering attendees talks and tuition from some of the brightest names in CSS. While we’ve so far kept the details under wraps, we’re excited to be able to finally share some of the fantastic speakers joining us at Generate CSS at Rich Mix in Shoreditch, London on 26 September 2019.

Having worked on Sass since before its first release in 2006, Natalie Weizenbaum is something of a CSS superstar. Not only has she lead the development of the language and its reference implementation since its inception, but in her current role at Google, she divides her time between working on Sass and leading the company’s CSS infrastructure team.

Sass has now become one of the most widely recognised and used tools in CSS developers’ repertoires. But with many of its initial functions – such as selector nesting, browser prefixing and variables – increasingly picked up by PostCSS or even rendered unnecessary by developments in browser capabilities, why is Sass still a mainstay for CSS devs? And why is Google embracing it for an increasing number of its products?

In her keynote ‘Sass in a PostCSS World’, Weizenbaum will explore the new role Sass is playing in CSS development and how you can integrate it with PostCSS to take care of all of your styling needs. Additionally, she’ll be covering the new Sass module system that makes sharing styles a breeze.

A front end developer with a love for CSS, Michelle Barker spends her days polishing UX for mobile-ordering startup Ordoo and her nights tinkering with CSS and documenting her experiments on her blog CSS {In Real Life}. She also writes for publications such as CSS Tricks and Smashing Magazine and is a Mozilla Tech Speaker.

In her talk, 'A Guide to Debugging CSS Grid’, Barker will run you through how to handle the powerful layout tool when things go wrong. Talking through examples of some common issues people face and breaking down the CSS Grid specs into more manageable chunks, she will help you understand what’s happening when Grid goes wrong. You'll be able to get your grids working in unison with other layout techniques and build flexible but foolproof designs.

With such fantastic speakers already confirmed and the remaining lineup to be announced imminently, demand for Generate CSS is building. So if you want to secure your place at the London conference on 26 September 2019 – particularly at our wallet-friendly super-early bird price of £149 + VAT – make sure you buy your ticket now.