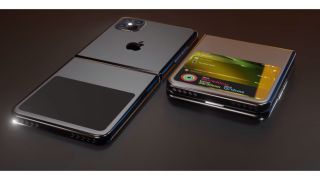 An avalanche of iPhone 12 leaks has got everyone talking this week, and the specs for the new models are pretty exciting, to say the least. But one noticeable omission from Apple's proposed plans is the intention to follow in the footsteps of its rivals and release a foldable phone.

YouTube account iOS beta news wondered what that might look like, and created a sleek concept video to give us an idea of a foldable iPhone 12 design. Enter, the iPhone Flip. The concept applies the leaked iPhone 12 design specs (including that super-charged new camera that will definitely make this phone one of the best camera phones) to the real-life Samsung Galaxy Z flip or the rebooted Motorola Razr. Check out the video below.

iOS beta news' video shows the handset closing into a tidy little square, with the hinge sitting on the horizontal, just like the Samsung Galaxy Z. But unlike the Z, there is no crease present on the screen. We're not quite sure how that would work, to be honest, but we're happy to glide over it in much the same way the video glides over showing us the screen in a half-folded state.

A new camera is on the back of the handset, with a pin-hole mounted lens rather than the usual notch, and below it (or on the front when the phone is folded) is a secondary screen – for notifications, the time and so forth. This means you wouldn't have to flip open your iPhone to find out if you had a new message, for example.

Samsung, Motorola and Nokia are a few of the brands that have already brought the flip phone out of the vault. In fact, YouTube user SkullCandy091 points out that Apple is often somewhat late to the party with certain new features, and "it'll take three years before they catch up and make a folding phone. The same thing happened with Face ID and swipe keyboard."

But are foldable smartphones here to stay? Some commenters on the video seem to think they're a novelty that don't stand up to current user needs, which may be why Apple hasn't leapt at the idea. It is true that they aren't all that convenient – now that we perform most of our daily tasks on our phones, do we really want to be opening and closing them all the time?

And, although the best flip phones certainly have their uses, and do have good capability – especially as a second phone – they come with some inherent design flaws (namely, fragile hinges) that mean the handsets can't yet house all the high-tech features users want from their phones nowadays. Perhaps Apple is waiting for the technology to create something as truly special as this concept model, or maybe it predicts the new rise of the flip phone will swiftly, well, flip away.

Want to get your hands on a new iPhone in the meantime? Here are the best iPhone deals in your area, on a variety of models: