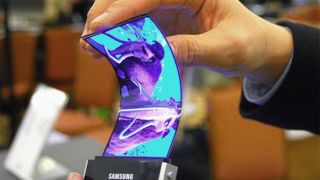 With the days counting down until Apple unveils the latest iPhones at its 12 September event, it's only natural that Samsung would want to spoil the party. And right on cue, its mobile division CEO DJ Koh has revealed that Samsung's long-rumoured foldable phone could be launching later this year.

Codenamed the Samsung Galaxy X – it may well have a completely different name by the time it appears – it's likely to be unveiled at the Samsung Developer Conference in November; around the same time that the next iPhones will be going on sale.

So, if you're after one of the best smartphones for creatives, should you hold off on a new slice of cutting-edge Apple goodness? We don't know much about the Galaxy X, but here's what we do know.

As we've already mentioned, DJ Koh has suggested that the Galaxy X will be be shown at the Samsung Developer Conference in November; it may go on limited sale before the end of the year, but don't get your hopes up. Realistically, you're unlikely to get the opportunity to buy one before 2019, which gives you a little extra time to save up.

And yes, you're probably going to need to save up for the Samsung Galaxy X, There's been no official word on the price but we're definitely into iPhone X territory here and probably beyond that. The smart money says that if you want to get a Galaxy X at launch then it's going to set you back around $1,500.

There's a reason for the eye-watering price, and that's the Galaxy X's foldable form factor. Folded, it looks like an ordinary phone; unfold it, however, and you unleash a 7-inch screen, comparable to a small tablet, making it the ideal phone for creatives with designs to take on the road and no desire to get overloaded with tech. Why pack a tablet when you can simply unfold your phone and show your work off that way?

There's a lot that we don't know about the Samsung Galaxy X; pretty much everything, in fact. However the rumour mill suggests that it's going to be bulkier than comparable phones; understandable, given all the extra technology that's going to have to be crammed into it.

It also seems likely that the foldable screens could make the Galaxy X a lot more fragile than similar phones, and we wouldn't be at all surprised if battery life and overheating became an issue. Releasing something quite so cutting-edge as a foldable screen comes with all manner of risks. However, Samsung seems confident that the technology is ready and the the market is ready for it too. We'll just have to see what it comes up with in November.

Samsung Galaxy X: what we want to see

Honestly, it all hinges on this foldable screen. If it's reliable and it looks as good as a tablet screen, then the Samsung Galaxy X could be an absolute godsend for creatives – especially if you can pair it with a quality stylus. That way you'd have a device that could do away with the need to carry a laptop or iPad Pro with you when you're off for client meetings or pitch presentations – just unfold the Galaxy X and you're good to go.

The other issue, of course, would be performance and battery life. Love for the Galaxy X's sexy new features is going to drop off pretty quickly if it runs out of juice in a couple of hours, or overheats due to extensive use. This is all stuff that Samsung will be ironing out now, though. The Galaxy X will need to hit a sweet compromise between performance and power usage, so let's hope it gets it right.