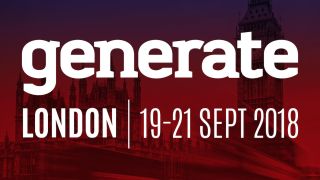 We’re delighted to announce that Generate London, the event for web designers and developers, is back later on in 2018.

Returning to the UK from 19-21 September, Generate promises to be bigger and better than even before. Held at the Royal Institution, this year’s unmissable conference will feature a day of practical workshops followed by an inspirational two-day conference.

With tickets set to go on sale soon, we wanted to share a sneak peak of a couple of the world-class names that’ll be speaking at Generate London to whet your appetite.

Despite having entered into the highly competitive field at just 19, in just a short space of time Sarah Parmenter has built a globally renowned web and iOS design practice that counts Adobe, Ellen Degeneres, Apple, Blackberry, News International, STV and the National Breast Cancer Foundation of America among its clientele. It's hardly surprising then that in 2011 Sarah was voted net magazine's Designer of the Year.

Joining her at the conference is Bruce Lawson. Bruce is a web standards consultant to Wix helping make Stylable.io, an extension of CSS and a preprocessor to make styling components reliable, easy and fun. He was previously deputy CTO at Opera and has been actively championing web standards since 2003.

Need more convincing? Here are just some of the great reasons to attend Generate London:

With so much going on, it’s important to make sure you don’t miss out: tickets go on sale soon so keep your eyes peeled for the launch of Generate London 2018.