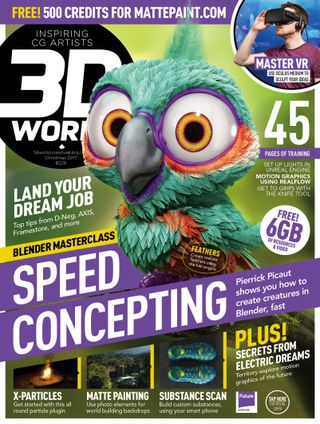 VR has come of age and we now have the technology and tools to engage the end users. Not only can we create compelling experiences, but we can now actually conceive and build projects in a virtual environment. In the new issue of 3D World we delve into VR, exploring narrative projects before jumping in to sculpt a robot character using Oculus Medium.

At any point in your career you might feel the urge to step up the ladder, or change tack completely. For that very reason, we bring you all the knowledge you need to make it happen, with tips from some of the biggest and best known studios out there.

We also have a fantastic tutorial on sculpting in Blender, as seen in our cover image. Check out some of the other brilliant articles you can expect from issue 228 of 3D World below:

In this feature we look at some of the ways in which VR experiences have developed and how we can now create immersive experiences that have meaning and emotional context, rather than focusing more on the tech.

This month we also bring you a complete training course for Unity artists, focusing on the particle system. Once completed you will have all the fundamental tools to create all manner of visual effects for your real-time projects.

You may be very aware of Realflow's use in movie visual effects, where it excels, but have you ever tried to sculpt with particles? In this tutorial you will learn how to create stunning liquid sculptures.

It may be the unsung hero of a VFX shot, but a believable matte painting shouldn't be recognised. It should purely support the rest of the shot, creating a realistic world for the action. In this in-depth tutorial, we show you how to create one using photo elements. What's more, we give you free access to some mattepaint.com credits, so you can download your own assets to use in your projects.