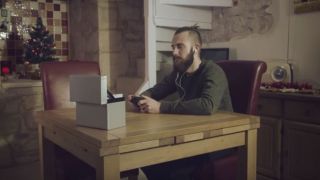 A Christmas film made by indie filmmaker Phil Beastall for a mere £50 has gone viral. The tear-jerker short shows a man counting down the days to Christmas. But instead of waiting for mulled wine, mince pies and presents under the tree – or indeed to give someone else a present as John Lewis' 2011 advert showed – he is waiting to listen to his Walkman.

Yes, that's right, he sits down and puts in an actual cassette tape into a Walkman, though there is a reasonable explanation – he does so to hear a message from his mother, which she recorded before she died. The film ends with three lines: 'Love is a gift, that lasts forever, Merry Christmas.'

This heartwarming tale was originally created in 2014, but Beastall reposted it this year in response to John Lewis' advert featuring Elton John, which reportedly cost around £7 million to make.

People are now calling for the department store to hire Beastall for next year's advert. Beastall has already done work for big-name clients such as Adobe, and we don't know yet whether John Lewis will consider this option. However, the amount of publicity generated from this campaign just goes to show that a) side projects matter, and can lead to paid work eventually b) if you can connect with people in the right way, your work will go far and c) everyone loves a good Christmas ad.

If all these tear-jerking ads are a bit too much for you, check out Lidl's more light-hearted response to the John Lewis ad, below.

Just because you don’t have £872 to spend on a piano, doesn’t mean you can’t be the next Elton. #EltonJohnLewis pic.twitter.com/TakObmWfqrNovember 15, 2018