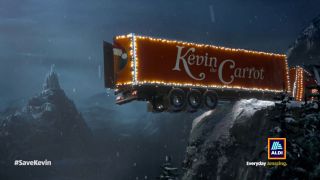 Every year, Coca-Cola releases a Holidays Are Coming advert. Every year, it features a big red Coke truck strewn with twinkle lights, which is now synonymous with Christmas in many parts of the world.

The 2018 advert (watch below) features all the classic accompaniments: a classic Santa, smiling children running through snow, a catchy jingle featuring sleigh bells.

Much less famous is Kevin the Carrot. But Aldi's festive vegetable, who first graced our screens in 2016, is stealing some of Coke's thunder this year with a Christmas campaign that looks very familiar. In the advert, a large truck winds through a snowy landscape; the sleigh bell jingle kicks in. This truck is orange rather than red (although you'd have to eat a lot of carrots to spot that), but other than that it's undoubtedly Coke-esque. Aldi has even purchased a real-life festive truck, which will be joining Coca-Cola's on its own tour of the UK.

While it's clearly a parody, people are not happy. Some are calling plagiarism; others feel that Aldi has ruined the perfect magic of a vaguely christmassy truck pedalling sugary drinks; some are missing the joke altogether. Here are some of our favourite Twitter comments so far.

Just got disgustingly excited thinking I was seeing the Coca Cola advert for the first time this year, but it was just Kevin the bloody Carrot 😒November 2, 2018

How Kevin the carrot is getting away with that advertising is bafflingNovember 3, 2018

Who thinks #CocaCola will be taking #Aldi to court over their Xmas advert? #KevinTheCarrot 🎄🥕#HolidaysareComingNovember 4, 2018

Is this all you could think of a lorry like Coca Cola... Kevin could of been in danger another wayNovember 2, 2018

However, it seems Coca-Cola isn't too upset to have gained a rip-off road-mate. In the spirit of giving, Coke has got in on the joke, with its GB Twitter account offering Kevin a hand.

Whether you think it's a smart parody or a festive travesty, one thing's clear: Aldi has won everyone's attention with this year's Christmas campaign. Let's see if it pays off.