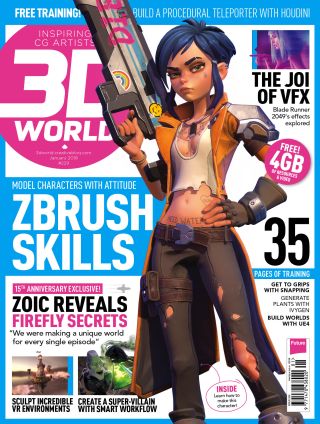 The new issue of 3D World magazine is out now, and it's as packed as ever with expert 3D tutorials, VFX secrets from the titles you love, and industry insights and inspiration.

Secrets from the production of smash-hit movie Blade Runner 2049, and a celebration of Firefly as the show turns 15, kick off our features this month. Plus, we bring you tutorials on creating video game characters in ZBrush, sculpting VR environments in Oculus Medium and Quill, and working with Unreal Engine 4 and IvyGen.

Look out for the January 2018 issue in stores now, or order a copy online here. Read on to see what's inside this month's magazine.

In this feature we explore the visual effects of Blade Runner 2049, with some fascinating render breakdowns and behind the scenes shots.

It's now 15 years since Joss Whedon's cult sci-fi show Firefly was aired but the visual effects still hold up well to this day, something common to the work of Zoic.

In this feature we get to talk about many aspects of the show's creation, including a look at some incredible elements that never made it to screen, before Fox cancelled it.

Not only that but we have an exclusive shot breakdown of the iconic 'Train Job' sequence with one of the original artists.

If you have ever wanted to create stunning game characters then this is the issue for you. Our awesome cover artist reveals his techniques for sculpting and texturing realtime characters, so you can jump start your own projects.

It's rare that we get to create assets in the some workspace as their final use, but with the rate of technological advancement that is becoming more and more possible.

This issue we show you how to dive into VR to create environments that will be used in VR. This is both a logical and exciting method of working.

In this tutorial you will learn some advanced techniques for building terrains for use in Unreal Engine 4. This is a fantastic step-by-step workshop that will give you invaluable insights into environment creation, which is applicable to any of your projects.

This issue's instalment of bootcamp introduces you to an incredibly useful plugin, which is also free!

Use it to grow splines that spawn polygons over any structure. The obvious use is ivy but you can swap out textures to change things from leaves to crystals or whatever you can imagine.