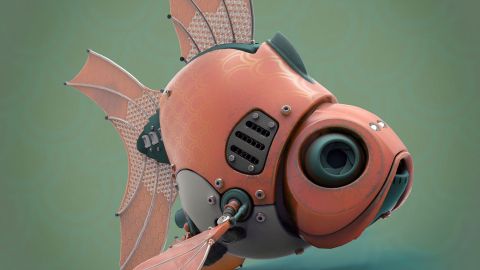 ZBrush 4R8's powerful and innovative new features make it an essential upgrade for existing users, and well worth a look for newcomers.

Pixologic's new update to its groundbreaking digital 3D sculpting, modelling and painting software ZBrush, includes a variety of new features that are sure to please any user.

Priced at $795 for a single license on Macs or Windows PCs, ZBrush 4R8's new updates are aimed at expanding the utility of ZBrush, most notably with hard-surface modelling by the inclusion of Booleans, editable primitives and new deformers.

Pixologic has further expanded the options for organic modelling with the development of Multi Vector Displacement Meshes and Alpha 3D.

There are many other workflows and UI improvements as well.

The most notable of these must be the inclusion of the long requested gizmo for object manipulation and a suite of deformers that respect the simultaneous manipulation of multiple SubTools.

The new gizmo moves, scales and rotates objects in the ZBrush window. You can now easily set the object centre, move multiple SubTools at once and even utilise a variety of deformers to further manipulate the shape of your objects. The gizmo and deformers will even respect masking across SubTools.

These additions provide a traditional method of moving SubTools in the world space and a powerful alternative to the Transpose tools. These updates offer something to excite any user with new possibilities and smoother workflows.

The Boolean toolset enables the creation of complex shapes with unprecedented ease and speed using traditional Boolean operations. These Booleans are fast and fully editable until you choose to collapse them into new geometry. The Boolean operators will respect poly meshes, primitives, NanoMeshes and Arrays. Even noisemaker will be factored into the Booleans.

Any SubTools can be set to add, subtract, union or difference in any order effectively allowing for highly complex forms.

These Booleans are achieved through a rendering and display mode so they remain fully live and editable until the user chooses to collapse them into a final object, which will retain a highly workable topology.

One wonderful aspect of the Boolean toolset is the ability to group SubTools into subgroups now. This is very helpful for large models in which you may have a large variety of related tools (such as teeth, armour plates or claws) that you want to keep separate but would like to collapse in the display as to not crowd the SubTool menu.

One new feature that is particularly exciting is the Vector Displacement Mesh. This allows complex organic forms, including those with overlapping parts and backfaces, to be stored as brushes for use on other meshes.

Multiple instances can be stored in a similar manner to the Insert Multi Mesh brush. This enables you to create brush libraries of a variety of teeth, horns, tentacles or any number of other complex forms you want to sculpt and store.

These brushes are particularly useful for applying things like overlapping scales or feathers to a surface and seeing immediate feedback in real-time.

Alpha 3D, meanwhile enables you to store any 3D object as an alpha and retain the ability to edit the orientation of the alpha at any time, effectively changing the alpha shape.

A subtle yet wonderful addition, Lazymouse 2.0 and lazy snap enables you to continue a stroke or a pattern after stopping to rotate the model. You can also cross over a stroke without adding buildup to the previous stroke. This is invaluable for things like machine panel lines, for example.

3D Text and Vector Shape Creator enables you to easily create strings of text in ZBrush as 3D objects and you can even import a SVG file to generate a logo inside ZBrush.

Use this in conjunction with the Boolean system to engrave words and designs into surfaces.

There are a variety of other interface changes which will be highly valuable to artists as well. The IMM selector creates a new menu for brushes that can contain a variety of content such as the IMM or VDM brushes.

Stored variant brushes are now visible along the top of the screen in a quickly browsable menu, providing seamless changes on the fly.

It is also now possible to cut, copy and paste between brushes, making customising your library so much easier.

These new features are rounded out with new support for multiple languages and text size scaling with your resolution to help support larger monitors and touchscreens.

ZBrush 4R8's powerful and innovative new features make it an essential upgrade for existing users, and well worth a look for newcomers.