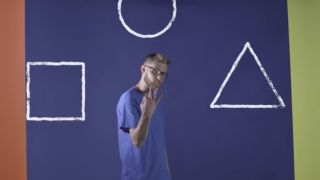 It's not uncommon for creatives to have a side hustle to help them through the leaner months, but we haven't seen a graphic designer branch out into the medium of comedic rhymes for a while now. All that's changed today thanks to Zack Post and his witty rap, Graphic Designer.

Taking aim at all the common cliches surrounding graphic designers (their tendency to wear black, design in threes, and work into the early hours), this rap throws a knowing glance at the industry that's sure to hit home with creators.

There are plenty of little jokes in Post's music video to make designers crack a weary smile – such as the use of Comic Sans in the opening, which has to be deliberately provocative, and his reference to other fonts we love to hate, such as Papyrus.

There are plenty more design terms cleverly sprinkled in lyrics, our favourite being the mic drop closing line, "fade me out to black, zero opacity."

Given that Post also works as a designer, he's got the real-world knowledge to spit some bars about the industry. And we're now wondering whether this video might be the start of an East Coast – West Coast style graphic designer rivalry? Think more Straight Outta Photoshop than Straight Outta Compton, with street tags rendered with beautifully kerned graffiti fonts.

Street battles or not, we love this rap. But be warned: it's catchy.