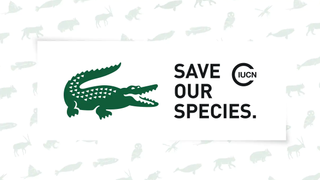 French fashion company Lacoste is set to roll out a new wave of its Save Our Species polo shirts this week, all of which sport an endangered animal in the place of its signature crocodile logo.

There's more to this campaign than logo design inspiration though. The stock numbers of the shirts match the numbers of each species known to exist in the wild. So the North Atlantic right whale, which will be an in-store exclusive at New York's Broadway outlet, will be limited to 444 shirts; while the Yemeni mouse-tailed bat will only feature on 150 shirts in London's Covent Garden store.

Other animals featured on the shirts include the northern hairy-nosed wombat, the mountain chicken, the Hawaiian monk seal, and the Cebu damselfly. In a stark reminder of the threat facing these species, the entire run will only include 3,520 polo shirts. The full range of logos was released recently in a tweet from Lacoste, below.

To learn more about the full range of shirts and animals, head over to the Lacoste site. Here you'll find information about the species in question, and the threats facing their existence. Shoppers will be able to pick up nine of the ten limited edition shirts from region specific shops, while an online exclusive will also be available to order from the Lacoste site. The shirts are expected to retail at £135 (roughly $170).