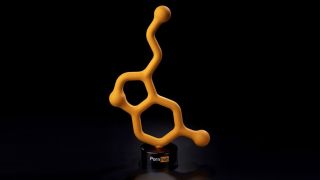 Yes, that Peter Saville. Co-founder of Factory records, designer of a whole stack of iconic album covers including Joy Division's Unknown Pleasures, Eno and Byrne's My Life in the Bush of Ghosts and Peter Gabriel's So. Over the years he's also designed the England football team home shirt, the livery for Manchester's Metrolink tram system and Burberry's new logo, and he's even had a stint at Pentagram.

It's a striking piece in bright orange that, Saville tells Ad Age, is inspired by the molecular structure of sex hormones and other behaviour-modifying chemicals such as serotonin and dopamine. "My intention was to maintain a degree of ambiguity in the final form the award took, with respect to the sexual spectrum so impressively encompassed by the award category line-up," he says.

He hasn't gone quite so far as Kanye, whose 2018 design was basically a sex toy, but there are definite elements in it that you might expect to find gracing the pages of specialist ecommerce sites. "Sculpturally the award has a bio-fluidity about it, abstractly evoking orifices, penetration, sperm and bondage toys," he explains, and notes that the big creative challenge in this project was "to design a trophy celebrating sexuality without reiterating the clichéd symbolism of erotica." Well, quite.