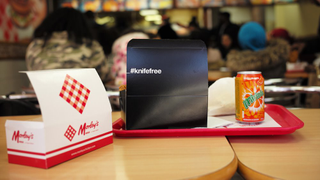 A campaign from the Home Office that aims to tackle knife crime with messages on fried chicken boxes has sparked a furore online. The government initiative, which sees more than 321,000 #knifefree boxes distributed to over 210 outlets in England and Wales, has been branded "offensive" and "racist" on social media.

The boxes in question have replaced the standard packaging of retailers such as Chicken Cottage, Dixy Chicken, and Morley's. Real-life stories from young people who have chosen to follow positive activities instead of carrying a knife are printed inside each box.

The boxes, which are one of the most controversial pieces of packaging design we've seen, were unveiled in a tweet from the Home Office, yesterday.

We are rolling out our #KnifeFree chicken boxes in over 210 chicken shops in England and Wales, including Morley’s, Dixy Chicken and Chicken Cottage. They use real life stories to show people how they can go #KnifeFree. pic.twitter.com/vrG4WWa56vAugust 14, 2019

As well as the #knifefree boxes, many of the fried chicken outlets will also use digital screens to raise awareness of the campaign. In a press release for the campaign, policing minister Kit Malthouse said: "These chicken boxes will bring home to thousands of young people the tragic consequences of carrying a knife and challenge the idea that it makes you safer."

Despite its intentions, the campaign has been met with a negative reaction. Shadow home secretary Diane Abbott slammed the plan in a tweet where she said: "Instead of investing in a public health approach to violent crime, the Home Office have opted for yet another crude, offensive and probably expensive campaign."

Abbott's comment is indicative of the overwhelming backlash the campaign has received. In the replies to the original tweet from the Home Office, users were quick to point out that supporting charities and issuing government policies would be a better way to address the issues surrounding knife crime.

Spending some money funding community outreach projects, social workers, job opportunities and schools too much effort for you then?August 14, 2019

Usually when we report on divisive campaigns we try to find a middle ground between the designer's intentions and the angry reactions. But on this occasion we just don't know where to start.

The biggest issue with this campaign is its problematic undertones. Given that fried chicken has been associated with racist stereotypes, it's unsurprising that people have called out the Home Office. Outraged Labour MP David Lammy took to Twitter to question the thought process behind the government's campaign.

Is this some kind of joke?! Why have you chosen chicken shops? What's next, #KnifeFree watermelons? https://t.co/34DwwxSmCNAugust 14, 2019

Twitter user Ken Wynn summed up the issues behind the campaign elegantly when he posted: "Kinda sounds like you're saying you think there's a demographic overlap between knife crime and fried chicken".

This isn't the first time chicken boxes have been used to tackle crime, either. Earlier this year, 35 branches of Morley's in South London used #knifefree boxes to address violence. This was in response to the fatal stabbing of 15 year-old Jay Hughes outside a Morley's branch in Bellingham.

The #knifefree chicken boxes are the latest in a series of government initiatives to tackle serious violence. Recently the government announced it will recruit 20,000 new police officers, and confirmed that all 43 police forces across England and Wales can use enhanced stop and search powers.