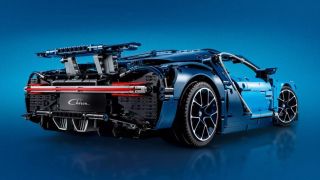 Lego is arguably the perfect Christmas gift. Relaxing, fun and no matter what your interests, there's a set to suit. So if you're struggling with what to buy your loved ones this year, you're in luck. Right now on Amazon and Walmart there's a number of impressive deals on some of the most popular Lego sets.

The Lego Technic Bugatti Chiron Super Sports Car definitely falls into that category, topping the wishlists of many a Lego and supercar fan. It takes 3,599 Lego pieces to put this amazing model together, so it's no surprise to learn it doesn't come cheap. But right now you can get it for less, with a whopping £110 knocked off the retail price. That means you could be the proud owner of a new Lego Bugatti Chiron for just £219.99 in time for Christmas.

If supercars aren't your thing, never fear, there are plenty more of the best Lego sets for adults on offer, including Harry Potter, Star Wars, Jurassic Park, Lego City and much more. And if you can't find the set you're looking for below, John Lewis has a wide variety of sets available and is offering money off Lego vouchers when you spend a certain amount (only until 17 December).

Here are the best Lego deals, to suit all interests and every budget, available right now.

Lego Technic Bugatti Chiron 42083: £219.99 at Amazon
Save £110: One of the most detailed Lego sets going, this incredible Bugatti Chiron consists of 3,599 pieces. The model includes a working eight-speed gearbox, moving W16 engine, detailed interior, and spoiler that raises and lowers. Oh, and don't forget to grab the lightailing light set to really bring it to life.
View Deal

Lego Hogwarts Great Hall 75974: £71.99 at Amazon
Save £18: One for the wizard-lovers in your life. This authentic replica of Hogwarts Great Hall is sure to put a smile on the face of any Harry Potter fan. And right now you can save a very decent 20% on the regular retail price.
View Deal

Save up to £60 on Lego sets at John Lewis
If you can't find a set to suit here, John Lewis has a wide range available. And right now, is offering money off (up to £60) coupons when you spend a certain amount. Hurry, deal ends 17 December.
View Deal

If you're in the US, you can currently get some great Lego deals at Walmart...

Lego Star Wars: The Rise of Skywalker Resistance Y-Wing Starfighter 75249: $55.99 at Walmart
Save $14: One for the Star Wars fans in your life, this collectible missile-firing, bomb-dropping Y-wing advanced starship model is a steal at this price. Hurry, we don't expect stocks to last long on this one.
View Deal

Lego Jurassic World Dilophosaurus Outpost Attack 75931: $22.99 at Walmart
Save $17: This Jurassic World set has been knocked down to almost half price! It features an outpost fence with a watchtower, movable crane and exploding gate and wall functions, plus a Dilophosaurus dinosaur figure and baby.
View Deal