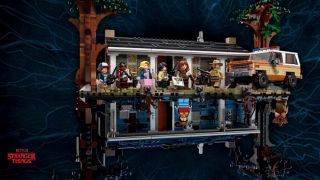 If you're a fan the hit Netflix series Stranger Things, you'll probably have heard the show is the latest object of Lego's affection. Announced earlier this month, the first lucky bunch of Lego lovers got their hands on the new set at a special event held at Lego's Leicester Square store in London.

The newly released 'Upside Down' set was then made available to Lego VIP members, with the rest of the world having to wait a couple more weeks before being able to purchase it. But that wait is finally over. As of today, the Upside Down is available to everyone (while stocks last) via the Lego shop.

If you're looking for set design inspiration or character design tips, you should take a closer look. One of the best Lego sets for adults we've seen to date (we've seen a lot), here's some of its key features:

There's so much about this design that excited us, we just had to get our hands on one. So being, ahem, Lego VIP members, we did just that. And can confirm it is every bit as spectacular as it looks.

The set includes all the main characters – Eleven, Chief Hopper, Mike Wheeler, Will Byers, Dustin Henderson, Joyce Byers and Lucas Sinclair – as well as its very own Demogorgon, which is (in Lego form) actually kinda cute. .

The Upside Down set costs £179.99 in the UK, and is available now via the Lego website. Ok, so it's not exactly cheap, but we have no doubt people will literally be queueing up to part with their cash as, for fans of Lego and Stranger Things, it just doesn't get much better than this. Plus something tells us that this is one Lego set that will be well worth the investment.