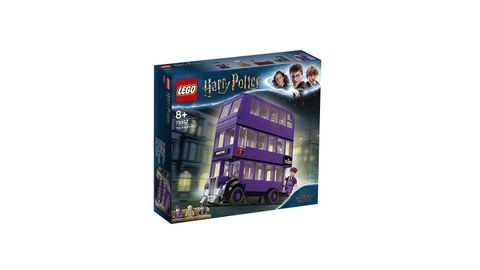 A remarkably authentic set that pays homage to one of the most iconic vehicles in the Harry Potter series. Slightly smaller than expected but still lots of fun to build, with the high level of intricate detail Lego has become renowned for.

"Ernie! Little old lady at 12 o'clock!" – a line die-hard Harry Potter fans will recognise as one from Dre Head, the hilarious Shrunken Head that sits – or hangs – alongside kamikaze driver Ernie Prang in the beloved Knight Bus. A triple-decker, purple AEC Regent III RT bus, Harry first encounters the Knight Bus after inadvertently (not that she didn't deserve it) inflating his uncle's sister Marge Dursley.

One of the most iconic vehicles in the Harry Potter series, it was super-exciting to see the Knight Bus transformed into a Lego set. Harry Potter fans have been creating amazing inspired Lego art for years now, so it's not surprising to see Lego itself follow suit. And it doesn't disappoint. In fact, it could soon well appear in our round up of the best Lego sets for adults.

The Knight Bus Lego set retails at £34.99, for which you get 403 pieces, divided into three numbered bags. Minifigures included are Harry Potter, complete with trunk and wand, bus driver Ernie Prang and conductor Stan Shunpike, all of whom are dressed almost exactly as they feature in the film. And let's not forget aforementioned Dre Head (the first piece we searched for when opening the set), a floating head that has been design so as to swing with the motion of the bus.

As always, Lego pulled out all the stops when fine tuning details with this set, right down to Ernie Prang's bald head with sideburns piece. But in terms of the actual build, what first struck us was the size of the bus. It measures six inches (16cm) high, six inches long and two inches (6cm) wide, which is quite a bit smaller than we were expecting. However we should stress this doesn't take anything away from the overall design, which is packed with lovely little touches to make it an authentic Knight Bus replica.

A triple decker bus, the upper deck is somewhat bland (featuring just a newspaper title), in comparison to the bottom and middle levels, which is where you'll come across the majority of the interior design. Here you'll find a bed, for the tired witch or wizard, of course, a chandelier, because public transport can be stylish too, space for Harry's trunk (which holds important mail), Ernie in the front seat and Dre Head sat neatly beside him. The Knight Bus Lego set's design has a hinged opening side panel, which is a stroke of genius. Closed, it's almost impossible to see the interior through the tiny windows, but the panel opens enough to be able to enjoy the inside in all its glory.

In terms of difficulty, this set is relatively easy, with numbered bags and the standard easy-to-follow Lego instruction booklet, which makes it a great choice for younger Lego/Harry Potter fans to get stuck in to. Once built, the bus feel very sturdy for future play/use, and there aren't a huge amount of small pieces on the outside that could be at risk of being lost. There's also the added bonus that the overall build and design means if any pieces did fall off, it would be pretty easy to put back together.

Lego has released a number of Harry Potter-inspired sets, focussing on various scenes and props in the series. But if, like us, the Knight Bus holds a special place in your heart, this set offers a really authentic replica and fun building experience, with a price tag that makes it accessible to all.

A remarkably authentic set that pays homage to one of the most iconic vehicles in the Harry Potter series. Slightly smaller than expected but still lots of fun to build, with the high level of intricate detail Lego has become renowned for.