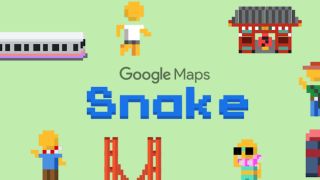 For readers of a certain age, the game Snake will bring back hazy memories of squinting at the screen of a Nokia 3210 as you furiously try to beat your best mate's high score. To give people the chance to relive the classic game, Google has added a version of Snake to Google Maps today as an April Fool's Day treat.

Rolling out worldwide today across Android and iOS, Snake on Google Maps sees players control buses and trains instead of a slithering serpent. The aim of the game is still the same though: players have to gobble up objects, in this case tourists and famous landmarks, while making sure they don't overlap themselves or run off the map. After a few goes, you'll realise (or remember) that this isn't as easy as it sounds.

Players get to choose from a variety of locations from Google Maps, including Cairo, London, San Francisco, São Paulo, Sydney and Tokyo. Each map and its associated landmarks are picked out in colourful pixel art, ensuring that this version of Snake brings out all of your '90s nostalgia.

According to Google Maps product manager Omar Abdelaziz, Snake on Google Maps will be available in the app for "about a week". However, if you just can't get enough of the game, you'll be pleased to hear that it has a standalone site, so you will be able to keep playing "long after April Fools is over."

As far as pranks go, Google is playing it very safe this year. That's if you can even call Snakes on Google Maps a prank. However, given that your social media feeds have probably been inundated with joke stories this morning, we appreciate that the search engine giant is saving you a bit of hassle by being upfront with its mild tomfoolery.

Another reason that Google is treading carefully around April Fool's Day could be related to a 2016 prank that backfired. That year Google launched the 'Mic Drop', a feature which temporarily replaced the 'Send and Archive' button. By clicking 'Mic Drop', users sent everyone in the conversation a GIF of a Minion dropping a microphone, as well as stopping further replies from appearing in your inbox.

The Mic Drop prank caused headaches for companies, with at least one freelancer losing work as a result of it burying their replies. Hilarious. In response to the fallout, Google issued an apology and deactivated the feature, so we can't really blame it for not taking a risk this April Fool's Day.