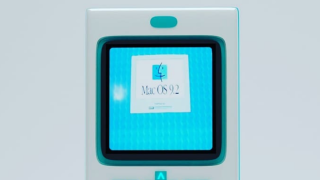 If anyone knows how to promote a product, it's Apple. Nowadays the tech giant's advertising is famous for its stripped back and straightforward aesthetic, but how would the iPhone have looked if it'd been released a couple of decades earlier? That's what these spoof ads imagine.

These days Apple's personal device is a hit with creatives, especially when paired with the best iPhone apps for designers. You might even be waiting to pick up an iPhone discount with the upcoming Prime Day deals. But would the iPhone have made the same impact if it looked more like Apple's early Macintosh computers than the smartphones we know and love?

To give you an idea of what an '80s and '90s iPhone would look like, illustrator and designer Future Punk has created a pair of charmingly retro ads. In them, we see an iPhone with sticky push buttons and an off-white plastic case that will make computer users of a certain age feel overcome with nostalgia.

There's also a bright and colourful iMac G3 reimagined as a handheld device. Both iPhones are a tantalising glimpse into an alternative past, and will make you feel wistful for a time that never was. Check them out in action with the video below.

We salute the level of detail that Future Punk has snuck into these videos. The VHS warp effects and overdramatic voiceover all come together brilliantly to make these adverts feel like the real deal.

If you weren't around for Apple's early adverts, this promotional clip for its personal digital assistant, the Newton, will give you an idea of what might have inspired Future Punk. We couldn't help but chuckle at the monotone narrator, who points out that Newton "sends faxes, and soon, electronic mail".

To get a look at the two devices without the video effects, head over to Future Punk's Instagram page, where you'll find nice, clean images of the retro iPhones, including the one below.

Have these iPhone concepts got you thinking that you need a new smartphone? If so, we've rounded up the best smartphones for creatives on the move. With devices in a range of shapes and sizes, you're bound to find a smartphone to suit your needs. Unlike the Newton though, they can't send faxes.