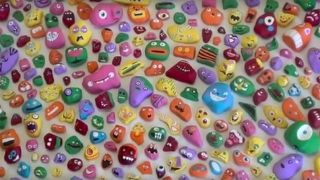 Games of "I Spy" usually only last the length of a car journey, or at least until one of the players gets bored and calls it quits. But one family in Michigan has been preparing their version of the game for over a year as they combine the classic game with their own hand-painted street art.

Created by dad Aaron Zenz and his six children, this project has seen 1,000 rocks painted in quirky colours and decorated with characterful faces. What's more, each rock is part of a pair, with one half residing in the Grand Rapids Children's Museum, the other hidden away in nearby locales waiting to be discovered.

Cleverly named the 'Rock Around' project, this challenge hopes to encourage families to put down their digital devices and interact more with the real world.

Families can get involved by tagging photos of their rock-face discoveries with the hashtag #RockAroundGR, as well as sharing where they uncovered their find.