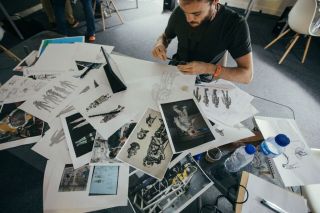 Trojan Horse Was a Unicorn , the unique, annual six-day festival for digital artists, is back! It's exclusive venue, unparalleled access to the speakers, great mentorship and recruitment section have rapidly given it a reputation as one of the best conferences on the creative calendar. But 2018 sees some changes.

Don't panic; all of what came before is still there but 'there' has moved from Troia, Portugal to Valletta, Malta. The move had to happen, due to the overwhelming demand from the growing tribe of loyal THU fans, who have spread the word through the digital art, animation and VFX communities.

What can you expect from THU?

This year, as always, there will be a large contingent of speakers, known as Knights, presenting and mentoring at THU. These come from some of the world's biggest studios and have experience in not just creativity but business and some of the auxiliary skills that are so important to being a success in this industry.

However, the big news is that the recruitment element has made massive inroads into the industry, with the organisers securing some of the biggest names in the world to come in search of the latest talent. Not only are Disney Animation Studios, Ubisoft, Naughty Dog and many others in attendance, but THU just announced that Lego and Netflix will also be there, hunting the huge pool of talent that can be found at the event.

So if you are looking to make a career move, or feel ready for a fresh challenge then head to Malta this September, take in the incredible talks, rub shoulders with your heroes, then have a portfolio review before heading over to speak to your future bosses!