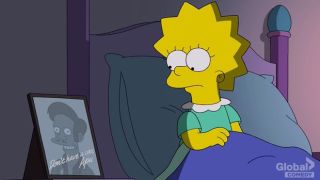 A new episode of The Simpsons has addressed claims that its Indian character Apu is a racial stereotype. Convenience store owner Apu Nahasapeemapetilon has been part of the animation series since 1990, and is voiced by a white actor (Hank Azaria) who puts on an Indian accent.

During the episode, which aired on 9 April, Lisa and Marge address the accusations – but some viewers have found the response insufficient.

The Simpsons goes after politically correct critics, singling out "The Problem With Apu” https://t.co/4QRHsUJnd9 pic.twitter.com/HZRYPWoqaIApril 9, 2018

In 'No Good Read Goes Unpunished’, Marge and Lisa indirectly discuss the controversy around the characterisation. During the episode, Marge reads Lisa her "favourite book ever” but is aghast to find that it’s full of racial commentary and stereotypes. She changes the story to make it politically correct, but Lisa objects.

“Well, what am I supposed to do?” Marge asks. Lisa turns and talks directly to the camera: "It's hard to say. Something that started a long time ago decades ago, that was applauded and was inoffensive, is now politically incorrect. What can you do?"

The camera then pans to a photograph of Apu on Lias’s bedside table, which is signed: "Don't have a cow - Apu".

Marge response, saying: ”Some things will be dealt with at a later date.”

"If at all," adds Lisa, with the pair staring directly at the camera.

The Problem with Apu

In an interview with the BBC, Kondabolu explained that the character was problematic because he’s defined by his job and how many children he has in his arranged marriage.

Kondabolu was among the first to respond to Sunday’s episode, labelling the scene “sad”.

Wow. “Politically Incorrect?” That’s the takeaway from my movie & the discussion it sparked? Man, I really loved this show. This is sad. https://t.co/lYFH5LguEJApril 9, 2018

He continued: “I used Apu & The Simpsons as an entry point into a larger conversation about the representation of marginalized groups & why this is important. The Simpsons response tonight is not a jab at me, but at what many of us consider progress.”

Other people have highlighted the irony of Lisa delivering the lines.

I think the fact that they put this "argument" in the mouth of Lisa's character, the character who usually champions the underdogs and is supposed to be the most thoughtful and liberal, is what makes this the most ridiculous (as in worthy of ridicule) and toothless response.April 9, 2018

However, others have pointed out that most of the characters in The Simpsons are parodies and based on stereotypes.

Loved how you guys handled this non-issue. People just want to cry about everything nowadays b/c it makes them feel like they’re doing something.Don’t ever change!Oh and I’m Indian and according to Twitter my opinion matters more on this topic, 😂.#ILoveApu #DontHaveACowManApril 9, 2018

The debate raises questions about representation for character designers, and opens a larger conversation about the characterisation of marginalised groups.

For the Simpsons animators, as Marge herself says, the immediate question is what to do with a 30-year-old character that has become politically incorrect.

The makers have not commented publicly.